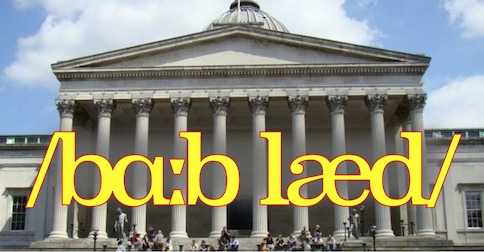 Day 4 of the UCL Summer Course in English Phonetics brings our annual guest lecture. This year we’re delighted and honoured to welcome the world-famous intonation expert (and my good friend) Prof Bob Ladd. I might also say honored, because although Bob comes to us from Edinburgh in Scotland, he’s originally American.

The vowels in Bob’s names illustrate a couple of differences between BrE and AmE – one phonemic, one phonetic. In BrE (the Southern variety which we use as our reference on SCEP), Bob contains the short LOT phoneme, shown in EFL materials as /ɒ/:

This short vowel contrasts with the long PALM phoneme /ɑː/, so we can get contrasting pairs like bomb /bɒm/, balm /bɑːm/. AmE lacks a distinct LOT phoneme, so in AmE bomb is pronounced with the same vowel as balm. Check out these two words in the Merriam-Webster Learner’s dictionary of AmE and you’ll see they have the same transcription, /bɑːm/. Here’s Bob with this vowel:

Bob’s surname contains the TRAP phoneme in both BrE and AmE. But this same phoneme is phonetically different in the two accents. In AmE it tends to be [æ] (as it also was in the older British reference accent RP):

This is why some resources like the Oxford English Dictionary and Gimson’s Pronunciation of English 8th Ed. have updated to /a/ as the BrE phoneme symbol.

And here’s a Quiz Question, to be answered in tomorrow’s SCEPLog: In the name of our tutor Margaret Miller, the letter r occurs three times, but only one of the three r‘s must be pronounced. Which one (and why)? 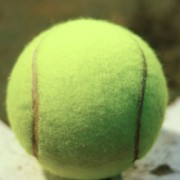 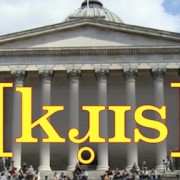 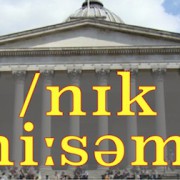 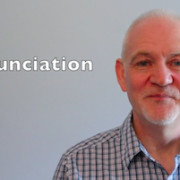 Points of view on point of views
0 replies