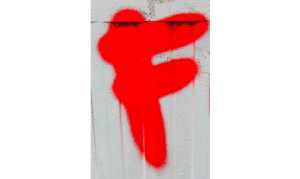 English has a pair of sounds written th. These are the “dental fricatives” θ and ð. The first occurs in thin, author and breath; the second in then, other and breathe. They’re relatively unnatural sounds, in a technical sense: they’re acquired late by children, and they’re relatively rare in the world’s languages.

When English is spoken by non-natives whose mother tongue lacks θ or ð, th-words are often pronounced with other, more natural sounds.  A famous ad for the language-teaching company Berlitz was based on the premise of a young German coastguard who pronounces θ as s and can’t hear the difference between the two:

(The ad wasn’t formally used but went viral and has given Berlitz loads of free publicity.)

Many Lithuanian speakers replace the unnatural English θ not with s but with the labio-dental f, referring to their nation in English as Lifuania. Here President Dalia Grybauskaitė says “Li[f]uania and all EU members… and European weal[f]”:

President Grybauskaitė tends to pronounce ð as v when medial or final (together, with), but to keep its dentality in initial position (the, those):

Some non-natives readily replace initial ð with v. Here is French speaker Dr Marie-Paul Kieny of the World Health Organization, speaking on the ebola crisis with ð > v in the, that, there, then:

When we look at variation and change in languages with dental fricatives, it’s unsurprising to find that some accents lack them. Castilian Spanish, for example, has θ, but words which have this sound in Castilian are widely pronounced with s in Latin America – in other words, the Berlitz-German pattern.

Native English-speaking th-changers do not generally follow the Berlitz-German pattern. Irish English tends to keep its th-sounds dental but to produce them as stops. British accents such as London-Estuary tend to be more like President Grybauskaitė: θ and ð fronted to f and v except that ð in initial position survives (or is stopped). Some speakers change medial ð to a tap ɾ rather than v; but the initial ð > v of Marie-Paul Kieny is less common. Note that initial position is a strong position across languages, and consonantal changes are often blocked there: many speakers retain θ and/or ð initially but replace them elsewhere.

whereas London actor Ray Winstone has th-fronting in things but not in think (“one of them manly things where you think…”):

Traditionally, th-fronting was associated in the British popular imagination with broad London speech, or “Cockney”. It’s also reported as long-established in the Bristol area, but of course London has greater visibility; I think that John Wells’s Accents of English only mentions British th-fronting in connection with London. Its status as a signature London feature was highlighted in the title of the 1960 Cockney musical Fings Ain’t Wot They Used T’Be.

But for a long time it’s been noted that the phenomenon is on the rise. It’s now heard, across Britain, from speakers including those of higher education and higher socio-economic class. Inevitably, then, it’s started to be heard – and seen – in the more serious kinds of television. So I thought it might be worth showing some audio-visual examples of th-fronting by BBC TV presenters.

Among BBC newsreaders, the one whose th-fronting I notice the most is Chris Eakin. He typically has non-initial ð > v in (an)other:

Next, here’s a presenter on the BBC’s astronomy show The Sky At Night. Dr Chamkaur Ghag, a UCL physicist, has a Punjabi name but an SSB-type accent (it’s ˈtʃamkoː ˈgɑːg in SSB). Here Dr Ghag has non-initial ð > v in together, further and without:

His initial ð is robust, as in that. So, for the most part, is his θ, as in methane and birth. But he seems to front θ to f here in Earth:

Next, the BBC’s political editor in the North West of England, Arif Ansari ˈaɹɪf ˈansəɹɪj, who’s from Merseyside. In this clip he has non-initial ð > v in another and whether:

Duncan Weldon, Economics Correspondent of BBC 2’s Newsnight, is from the most northeasterly part of England, Northumberland. Here he retains ð in that, but has labial th both non-initially in weak wage growth, and initially in things. I’ve also included what sounds like th-fronting in audio-only through and months:

In the following clip, Weldon seems visually and auditorily to be producing simultaneous v and ð in further:

(Chamkaur Ghag may be doing something similar in Earth above, where the word is followed by t.) This suggests that at least in some cases, the new labial articulation may be added before the old lingual one is lost. A similar thing happens in systems where the liquids l and/or r acquire labialization which subsequently replaces the tongue articulation.

Th-fronting is also found north of the border. I don’t have a BBC presenter for you, but here’s Scotsman Sgt. Duncan Slater, the first double amputee to reach the South Pole, with non-initial ð > v in another and cold weather injury:

With its wide geographical distribution and its spread upmarket, th-fronting could well be one of the fings to come in fully “standard” BrE pronunciation, especially in non-initial position, with initial θ > f perhaps becoming established in some words (through?) sooner than others. (I suspect it may be more likely before rounded sounds.)

There are lessons here for both lower- and higher-level non-native learners/users of English. Native English listeners are familiar with fronting and stopping, whereas th-backing to s and z is more alien and potentially disruptive. Compare these images of four speech sounds and decide which two most resemble each other: 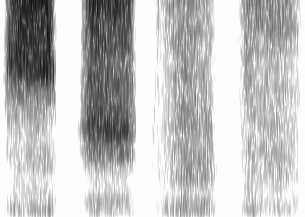 I imagine you’ll agree that the third and fourth are the most alike. These spectrograms, from the website of Kevin Russell at the University of Manitoba, show from left to right s, ʃ, f and θ. English makes a clear difference between its sibilant sounds like s, ʃ and its non-sibilant sounds like f, θ. Sibilants have strong energy concentrated in a relatively specific part of the frequency range (the vertical dimension in the picture). Non-sibilants have fainter energy spread more evenly from top to bottom. From an articulatory point of view it may seem drastic to change from a tongue gesture to a lip gesture; but from the primary auditory-acoustic point of view, it’s a smaller step to change non-sibilant θ into similarly non-sibilant f than into sibilant s. (The same applies to the voiced sounds.)

In my experience, many higher-level non-natives, wary of English’s special th-sounds, produce them too strongly. Paying perhaps too much attention to articulation and not enough to the actual sounds, they carefully put tongue to teeth and produce copious amounts of frication. This can sound to native ears too much like s and z. Native English θ and ð are very weak sounds, often with little or no audible frication – still less than in the spectrograms above.