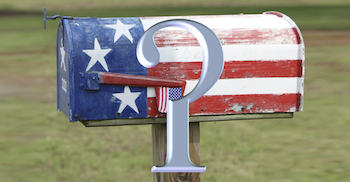 The usual story is that Americans don’t pronounce /t/ as a glottal stop [ʔ] except under very restricted circumstances: chiefly, not before a vowel.

So it’s okay, in General American accents, to pronounce /t/ as a glottal stop before an onset consonant, as in Sco[ʔ]land. And it’s okay before a syllabic /n/, as in cer[ʔn̩]. (Actually, in both those contexts the tongue can make a [t]-closure as well, in which case what you have is glottal reinforcement rather than just a glottal stop.)

But it’s not considered okay to pronounce /t/ as a glottal stop before a vowel, as in city or not only. These are the classic environments for American ‘flapping’ (or tapping): pronouncing /t/ as a rapid, /d/-like flick of the tongue, for which the IPA symbol is [ɾ], e.g. ci[ɾ]y, no[ɾ]only. If you pronounce these /t/’s as glottal stops, you get something that’s widely felt to be British-sounding. Millions in England and Scotland do it. Word-internally, as in ci[ʔ]y, it’s perceived as not very standard; word-finally, as in no[ʔ]only, it’s by now pretty standard, as I discuss in my English After RP.

Although this kind of description is found all over the internet, for some years a rise has been noticed in young Americans pronouncing /t/ as glottal stop before vowels. There are antecedents in New York City and African American English, but I’ve heard it from younger speakers who seem otherwise General American.

Here I want to consider two processes by which American pre-vowel glottal /t/ may arise. The two processes seem to be more or less opposites of each other. And when different processes end up producing the same result, phonologists have sometimes termed this a conspiracy.

So how are some young Americans conspiring to pronounce /t/ as glottal stop before a vowel?

The unpacking of syllabic /n/ means turning a single sound [n̩] into a sequence of a weak vowel plus [n]. This is widespread in Britain. For years now, younger SSB speakers have been opting to pronounce words like certain and important not as cer[tn̩] and impor[tn̩t] but as cer[tən] and impor[tənt]. Again, this is discussed in English After RP.

The same unpacking can be heard from some younger Americans. Remember that these words are ones in which the /t/ before the syllabic /n/ can be a glottal stop, e.g. cer[ʔn̩]. The key thing is that the speakers in question can leave the glottal stop intact even when they unpack the syllabic /n/. The result is cer[ʔən], or cer[ʔɨn] or cer[ʔɪn]. Whichever weak vowel you choose, the result is the same: an American glottal /t/ before a vowel.

Here’s a young YouTuber in a video on rhythm and meter in rap, saying with cer[ʔ]ain rhythmic emphasis:

In Albuquerque not long ago, I heard examples including these from a young New Mexican tour guide:

For quite a while, younger speakers of English seem to have been using more ‘hard attack’ in their speech. This refers to the use of glottal stop to begin a word-initial vowel, especially in running speech. It’s a basic property of German, which is why heavily German-accented English can produce utterances like [ʔ]I [ʔ]always [ʔ]arrive [ʔ]early [ʔ]in the [ʔ]afternoon. English speakers don’t do it as much as that, but I think they do it more than they used to (perhaps with younger female Americans leading the way and others on both sides of the Atlantic catching up); yes, it’s in English After RP.

Hard attack naturally blocks regular flapping. Let’s say a speaker chooses to say not only with hard attack on only. This gives not [ʔ]only: the /t/ is no longer before a vowel, and this prevents the regular flapped version, no[ɾ]only. So the more a speaker uses hard attack, the less /t/-flapping they use. Our YouTube rapper uses quite a lot of hard attack, e.g. rhythmic [ʔ]emphasis in the previous clip, and three tutorial [ʔ]episodes [ʔ]already:

Now here’s a hard attack after final /t/, in get a teleprompter:

He makes a visible tongue articulation for the final /t/ of get at 0:12, so this is ge[t ʔ]a teleprompter.

But that tongue articulation can disappear. After all, if glottal stop is consonantal rather than vocalic, it shouldn’t be surprising if some speakers use glottal /t/ before it, as they can before consonants more generally, e.g. before /l/ in Sco[ʔl]and. This would give us no[ʔ ʔ]only or ge[ʔ ʔ]a teleprompter. My guess is that this glottal stoppage between vowels comes to be analysed as simply /t/. Hey presto – another American glottal /t/ before a vowel. Here from our YouTuber is the way tha[ʔ]I make these videos:

My Albuquerque tour guide especially liked to do this before on:

no[ʔ]on the tour
sho[ʔ]on stage
selling i[ʔ]on eBay
(He also said prou[ʔ]of it. Final /t/ and /d/ can be neutralized before a vowel in GenAm.)

And here’s another YouTuber (discussing video frame rate) who has glottal /t/’s before vowels as well as phrase-finally, and plenty of hard attack. The words are So [ʔ]in [ʔ]order to ge[ʔ]a true 24 frames per second with that nice cinematic motion blur that the [ʔ]eye would see, you’re going to double your frame ra[ʔ].

To conclude, this looks to me rather like American pre-vowel glottal /t/ arising in two virtually opposite ways. In one case, a pre-consonantal glottal /t/ finds itself before a vowel. In the other case, a pre-vocalic glottal stop turns into a /t/.