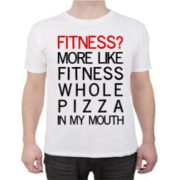 After the indulgence of the holiday season, New Year is a time when we’re encouraged to think about fitness. I recently encountered this meme: ‘Fitness? More like fitness whole pizza in my mouth’. There’s a lesson for non-native users of English here.

The joke rests on the fact that fitting this can sound very like the word fitness. Several phonetic features combine to make this possible. One is the fact that the suffix -ing is often pronounced as -in. This is more common in casual speech (and in pop-rock singing), though for some speakers it’s a usual pronunciation. Here’s a British woman saying goin’ around selling, with both the -in and the -ing pronunciation in a single phrase:

So fitting may be pronounced fittin’. And after t, the ending may be further reduced, producing fit’n’.

Another feature, and one well worth pointing out to non-natives, is the weakness of the initial th- in unstressed words like the and this. This sound (phonetic symbol ð) is often over-articulated by non-natives; but in native speech it’s so weak that it often assimilates completely to a preceding s, z, l or n. For instance, in this can be pronounced in‿nis. Listen to this American man saying What was the low point in this?, with the final syllable repeated:

So fitting this can become fit’n’nis, which is very like fitness.

I encourage non-natives not to pronounce -ing as ɪn, but rather to practise the ‘standard’ form ɪŋ. On the other hand, I think it’s worth trying out assimilated forms like in‿nis (for in this) and how’s‿zat (for how’s that) as a correction for over-pronouncing th, and to see how natives negotiate tricky word connections.