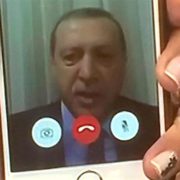 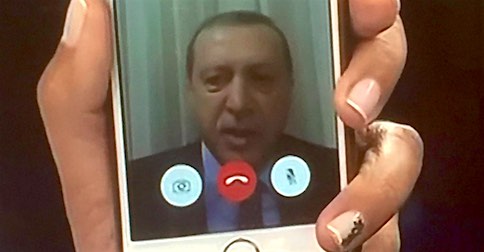 The name Erdoğan raises several questions for speakers of English. One concerns the unfamiliar Turkish letter ğ; this is readily converted into English w. But the vowels are more problematic. Here I’ll discuss the stressed initial vowel.

In most languages, the spelling er corresponds, logically enough, to some kind of ‘e’ vowel followed by some kind of ‘r’ consonant. In Turkish, the vowel is a relatively open ɛ (leaning towards æ for some speakers):

The nearest English equivalent would be the pronunciation of the word air (ɛr in America, ɛː in southern Britain).

But in English words, the spelling er before a consonant is generally pronounced as the NURSE vowel: a long schwa əː in southern Britain, and an r-coloured vowel ə˞ in America. There are hundreds of examples, eg:

The weekend’s events have put Turkey’s president on everyone’s lips. So what are we hearing on British TV?

Occasionally we get the ‘air’ = SQUARE pronunciation:

But the herd’s majority verdict seems to be the ‘er’ = NURSE version:

Regarding the final vowel of Erdoğan, the most accurate English choice would be the PALM vowel, as in Botswana. This is the option chosen by Americans. Although some Brits use PALM, we can hear in the clips above that their majority choice is the TRAP vowel. This difference between American PALM and British TRAP often arises in foreign names, eg Ghandi, Vietnam, Sri Lanka, Milan.

However, the British choice of TRAP in Erdoğan is rather unusual, in that English words containing a after the sound w are generally pronounced with the vowel of LOT. Examples:

Perhaps that exotic letter ğ somehow interferes with the influence of the w on the following a.

(The w generalization is blocked if the following sound is ‘velar’, k, g or ŋ, in which case the vowel of TRAP is used: wax, wag, quack, swagger, wangle, Swank, etc. There’s a small number of other exceptions, such as the onomatopoeic word wham and the name David Walliams.)

So
Scroll to top