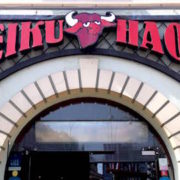 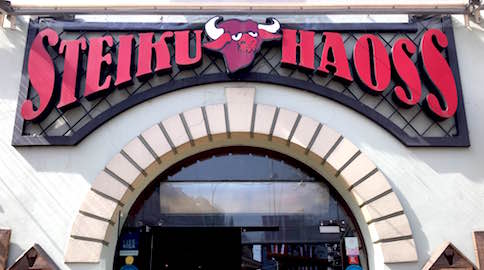 This week I’m in Rīga to teach at the University of Latvia; very near my hotel is a restaurant whose name carries an important lesson for most learners and non-native users of English.

Visitors from around the world will recognize that Steiku Haoss is a steak house. But most native English speakers probably won’t recognize that the name is a pun: haoss is the Latvian form of the word chaos, so the restaurant is also a ‘chaos of steaks’. Here’s a Latvian kindly saying it for me:

The English pronunciation of chaos is different from that in most languages. As a result of the historical English ‘Great Vowel Shift’, the five vowel letters of the Roman alphabet are often pronounced like their English names: A, E, I, O, U. For example mosaic, being, compliant, oasis, ambiguity – and chaos. Here are various British speakers saying chaos (the first is Prime Minister David Cameron):

This might be transcribed phonetically as kɛ́jɔs (or ˈkeɪɒs). It’s very different from the kind of pronunciation used by almost every other European language, including Latvian. (Different languages pronounce the initial consonant of such Greek words variously as k, h or the back-of-the-mouth fricative x.)

The important point for learners and non-native users of English, I feel, is that you should try to give international words the pronunciation appropriate to the language you’re speaking. Many non-native users of English, however, fall back on their own pronunciation of words like focus and chaos, resulting in what sounds to English speakers more like f*ck us and house (or perhaps cows). Of course, if non-natives are speaking to each other, the problem may be less.

Thee you
Scroll to top