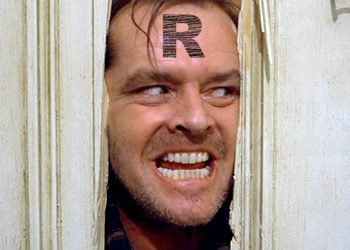 Standard Southern British (SSB) is a non-rhotic accent family, which means that it allows the sound /r/ only when a vowel immediately follows, e.g. right, very, for example. It is not allowed before a consonant or a pause, e.g. forty four. This loss of /r/ occurred in England during the 18th century, and resulted in important mergers of word sets: START words merged with PALM, NORTH with THOUGHT, and lettER with commA. These word sets remained distinct in the more conservative accents of Ireland, Scotland and North America.

In non-rhotic systems, then, farm rhymes with calm, law sounds the same as lore, and Malta rhymes with Gibraltar. Children acquire words like saw and sore as phonetically identical; when subsequently learning to write, they find that such words are written differently, and the spellings simply have to be memorized. Of course, pupils make mistakes with these spellings – and so, occasionally, do adults:

Non-rhotic accents are not all the same: there are different sub-types of non-rhoticity. One is the SSB pattern, shared by broad New York City and Australia; I’ll call it “Britain-Brooklyn-Brisbane”. In these accents, a word like far has no final /r/ before a consonant or pause; but, if a following word starts with a vowel, a “linking /r/” may be inserted. Here are far /fɑː/ and f/ɑːr/East from the Oxford Advanced online dictionary:

Another pattern of non-rhoticity has no linking /r/. It’s exemplified by the traditional accent of the American southern states and by South African English, and I’ll call it “Deep-South-African”. In these accents, words like far are typically pronounced without /r/ even if a vowel follows. Here is Mississippi writer William Faulkner accepting the 1949 Nobel Prize for literature without linking /r/ in “there‿are no longer problems of the spirit” and “he lives under‿a curse”:

In cases like these four, the Britain-Brooklyn-Brisbane accents would tend to insert linking /r/. The environment for linking /r/ can be stated with great simplicity, if we assume this analysis of the vowel system. (See also my book English After RP.)

Linking /r/
Insert /r/ between a monophthong and an immediately following vowel.

Often, linking /r/ occurs when there’s an ‘r’ in the spelling: for example, far east, professor of psychology, open your eyes, etc. But three of the linking /r/ vowels are sometimes written without an ‘r’. These are:

Words belonging to the PALM, THOUGHT or commA sets were never historically pronounced with /r/, and so have no ‘r’ in the spelling. For example, Shah, saw, law, draw, thaw, pizza, America, Obama, Angela.

Linking /r/ is a phonetic phenomenon, determined by phonetic factors and mostly operating unconsciously – like the phenomenon whereby a vowel is pronounced in wanted but not in walked. Speakers follow such rules without thinking, and without referring to spellings. So speakers will insert /r/ after both far and Shah, after both your and saw, after both professor and Obama.

Here is a wide range of audio examples:

Every Christmas in England you’re bound to hear hosanna/r/in excelsis:

And here Gavin Hewitt, the BBC’s most senior journalist covering Europe, refers to the French President as François/r/Hollande:

As an alternative to linking /r/, speakers sometimes choose to add a glottal stop (or glottal “attack”) to the following vowel. This is fairly common in slow, emphatic speech or with less familiar words and phrases; it’s perhaps becoming more common among younger speakers. Here TV presenter Phillip Schofield uses a glottal attack in a relatively emphatic “Law [ʔ]and Order UK”, then immediately follows it with a faster, less emphatic “talk about drama/r/on our screens”:

Unwritten linking /r/ has presumably been heard as long as START, NORTH and lettER have been merged with PALM, THOUGHT and commA. It’s a myth that unwritten /r/ is a recent phenomenon: copious evidence can be found of unwritten linking /r/ in old films. Here are clips from Pathé newsreels of 1935 and 1936, the first one referring to the recently deceased Lawrence of Arabia:

changing his name to Shaw/r/and forsaking his high rank:

Another Hitchcock film The Paradine Case (1947) gives us actress Ann Todd (b. 1909) using unwritten /r/ in “I can’t imagine anything more wonderful than being in a gondola/r/again with you”:

And from 1947 and 1949 Pathé newsreels here is the famous narrator Bob Danvers-Walker (b. 1906) using unwritten /r/ in “her taffeta/r/Edwardian dress” and “international law/r/and order”:

And from 1955, in the BBC serial Quatermass II, we have Monica Grey (b. 1929) using unwritten /r/ in “You said an atmosphere of ammonia/r/and methane”:

/r/ is a variable sound, whether or not it’s linking, and whether or not it’s written. In several of the older clips we can hear the tap, ɾ, which is old-fashioned now but persists in the English of classical actors and singers. In an earlier post I gave clips of classical actor Timothy Dalton using unwritten tapped /r/, e.g. in my quota/r/of subjects:

Derek Jacobi as Hamlet does the same in O, that this too too solid flesh would melt, thaw/r/and resolve itself into a dew:

And here is the grand actress Hermione Gingold (b. London 1897), in the musical A Little Night Music, putting an unwritten trilled /r/ into At the villa/r/of the Baron de Signac:

In using unwritten linking /r/, the RP speakers above were simply following the phonetic rules of their language, unconsciously, as all speakers of all languages do. However, linking /r/ is unusual in that it was seized upon by various “authorities” as undesirable, and it acquired the notorious label “intrusive r”. It was rather ironic to insist that speakers slavishly follow the spelling when English pronunciation deviates from it so often; but in the RP era it was a matter of huge social consequence to pronounce in a narrowly-defined “received” way. So speakers were expected to half-suppress a rule of their own language, de-merging lexical sets which had been collapsed in southern Britain for a century or more.

Inevitably, speakers often ended up suppressing linking /r/ in general, whether written or not. Here an RP-speaking interviewer in 1965 asks the Beatles “Have you checked, gentlemen, whether you’ll be able to wear your MBEs on any of these other foreign television programmes?”. He suppresses the normal linking /r/ in your‿MBEs:

In this 1950s newsreel on barrel-making, the RP narrator suppresses linking /r/ in hoops are‿added:

And here is the late TV astronomer Sir Patrick Moore suppressing linking /r/ in a picture‿of one:

This inhibition of linking /r/ in self-conscious RP effectively meant switching to the Deep-South-African variety of non-rhoticity.

The very few non-natives who do use supposedly “intrusive” /r/ are those with an excellent ear who managed to sound native or very nearly so. Earlier this year Italian phonetician Alex Rotatori, who has extremely native-like SSB pronunciation, posted a connected-speech transcription about his home town of Tarquinia, beginning tɑːkwɪniər ɪz… Alex’s transcription of unwritten /r/ isn’t a mistake, it shows what a good phonetician he is.

Linking /r/, written or not, brings English into greater conformity with the universal preference for alternating consonants and vowels. I often think that a better term would be “separating /r/”, since it keeps vowels apart, like the /n/ in the indefinite article before vowels: an apple a day. It’s the alternation of vowels and consonants which makes spoken language possible: streams of consecutive vowels would be unintelligible.

Arguably it’s stranger to allow sequences like this subpoen[ə.ɪ]ng than to break them up, as in SSB subpoena/r/ing. And Americans aren’t that happy with abutting vowels either, often crushing them into one. E.g. pizz’Express (which sounds like Pete’s Express), and the Obam’administration:

The only /r/ that’s sensibly worth avoiding is the kind that constitutes a mistake when attempting another accent. This is a common pitfall when AmE is attempted by southern Brits, who wrongly assume that because BrE card /kɑːd/ corresponds to AmE /kɑrd/, then BrE calm /kɑːm/ must correspond to AmE /kɑrm/. The great actor Gary Oldman does a fine overall job of sounding American, but he does tend to make this kind of hyper-rhoticity error. Here, from the film Léon, he says “I like these ca/r/m little moments before the storm”, and from Hannibal “the stigma/r/of your recent dishonor”:

Those /r/s can be called intrusive, because they don’t belong in the accents he’s attempting. But describing a real phonetic rule in some language as “intrusive” is just prejudice.