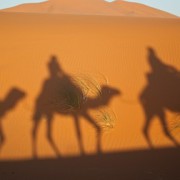 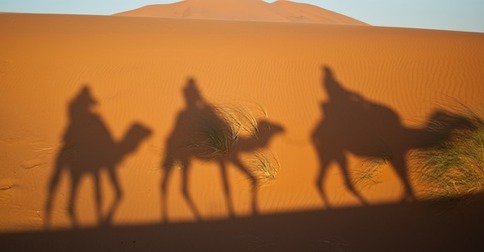 The word myrrh has an obscure spelling and a fairly obscure meaning, but most native English speakers know how to pronounce it. It surfaces annually in the Christmas story, as one of the three gifts brought to the baby Jesus by wise men from afar: gold, frankincense and myrrh. (It’s an aromatic resin.)

Myrrh rhymes with stir, blur and prefer. These words contain the NURSE vowel, which in American English is r-coloured

but in BrE is a long schwa sound:

Many young schoolchildren in Britain and other countries learn the words frankincense and myrrh through nativity plays, which act out the Christmas story for audiences of parents. There’s an amusing anecdote about a school nativity play in one of the most popular TED Talks, by British educationalist Sir Ken Robinson. The anecdote begins at 4:20:

If you listen, you’ll hear that Sir Ken pronounces myrrh like mare, a female horse.

In other words he uses not the NURSE vowel əː but the SQUARE vowel ɛː. The likely explanation for this is that he’s from Liverpool, Merseyside. People in that region tend to have a single merged vowel in both NURSE and SQUARE words. This single vowel is variable, but ɛː is certainly a common pronunciation. And, although Sir Ken doesn’t have a strong Merseyside accent, he’s evidently learned the word myrrh with this vowel.

The first vowel in Merseyside is also the NURSE vowel in standard accents, but tends to be pronounced with the merged NURSE-SQUARE ɛː in the broad accent of the region.

There’s a nice explanation of the spelling of myrrh in this post on John Wells’s blog. (Basically, the h indicates voiceless r in Ancient Greek.)

The most familiar dictionary symbols for the BrE NURSE and SQUARE vowels are in my opinion both rather misleading. /ɜː/ for NURSE implies a bigger difference in quality from schwa than really exists. /eə/ for SQUARE implies a diphthong, but a pure long vowel is now more common. So I prefer Oxford Dictionaries’ /əː/ and /ɛː/ respectively. Similarly, for the AmE NURSE vowel I prefer the /ɚ/ of the Merriam Webster Learner’s Dictionary.

What estate?
Scroll to top