Getting on for five years ago, my post Fings to come discussed the appearance of TH-fronting in the speech of British news presenters and others on TV. TH-fronting refers to the use of /f/ and /v/ rather than /θ/ and /ð/ in words written with ‘th’. (At the start of words like the, this, that, TH-fronters tend to use not /v/ but /d/, or something like it.)

With its wide geographical distribution and its spread upmarket, th-fronting could well be one of the fings to come in fully “standard” BrE pronunciation, especially in non-initial position, with initial θ > f perhaps becoming established in some words (through?) sooner than others.

Half a decade on, TH-fronting is continuing its spread. It seems, as I predicted, to be establishing itself in some words more than others. I was interested to hear and see a journalist on the BBC’s Newsnight recently (March 1st) pronouncing thirty-three with TH-fronting in three but not in thirty. The phrase is ‘…which has meant that the government has had to pay thirty-three million pounds to Eurotunnel’:

The speaker is Katy Balls, political correspondent of the conservative magazine The Spectator. Her accent, I think, counts as contemporary and standard. Ms. Balls’ tongue tip pops out for /θ/ in thirty, but not at the start of three, where a lip movement is visible. You may see it more easily if you use YouTube’s settings to play the clip more slowly.

I think the main factor here is word frequency. The word three is used a good deal more often than thirty. If we search in the CUBE dictionary for words beginning with the sound /θ/, and sort the results by frequency on the web, three appears as the first item, while thirty is the 43rd: 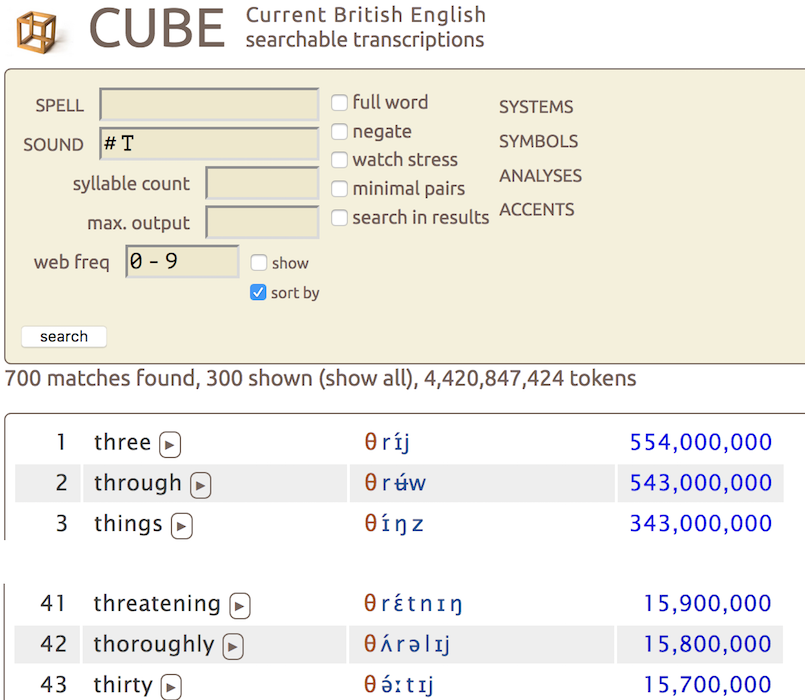 It’s often the case that commonly used words exhibit a change earlier than rarer words. For example, the relatively new pronunciation of the NEAR vowel as a monophthong /ɪː/ is most established in common words like here and year.

In the quote above from my 2014 post, I suggested TH-fronted through as a contender for early standardization, and I repeat this in the chapter on TH-fronting in my new book English After RP. Through, approximately as common as three according to CUBE, shares with it the presence of /r/ after the initial fricative: English /r/ is generally labialized and this probably encourages the labial articulation of the preceding ‘th’. So it was no surprise today to find Katy Balls TH-fronting the word through on the BBC’s The Andrew Marr Show, in ‘half of Leave-voters do want the deal to go /f/rough’:

Of course, my point is not that Ms. Balls’ pronunciations are remarkable, but rather that they’re unremarkable. (Equally unremarkable TH-fronting can be heard regularly on Newsnight from the programme’s Economics Editor, Ben Chu.) We may have reached a point where those BrE dictionaries that list multiple variant pronunciations of a given word (which CUBE does not) should include TH-fronted forms – for some words at least.