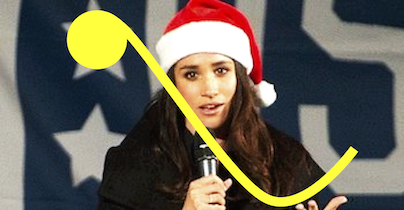 The BBC recently asked me and other phoneticians to comment on the idea, expressed in social media, that Meghan, Duchess of Sussex has started to acquire a British accent.

There are indeed some signs in video clips that she occasionally shows British influence. For example, here she is on a visit to my birthplace, Birkenhead (full speed, then slowed down):

The typically British feature here is the use of a fall-rise intonation on a polite yes-no question (YNQ). This means that a high pitch is reached in the ‘nuclear’ syllable (in this example make) followed by a sharp fall to low pitch, with a little rise at the end of the phrase (us).

Americans are more likely to say YNQs with a high rising intonation:

Did you make any new /friends?

But the British (at least the Southern British) love the fall-rise:

Have you got any science \/background?

Did you know about \/so and so?

Have \/you got any questions?

Are you going to make \/us be in the hospital twenty four hours a day?

Did you \/see the performance at Tara?

D’you mind if I make my hours up to\/morrow?

Are there any matters arising \/from those minutes?

Have you \/got folks at home?

Have you got your \/eye protection on?

Does anybody care to \/fix that?

Have you got any ex\/plosives?

Have you got yours \/with you?

Did you see what I \/did there Janie?

Have you seen any crazy \/fans whilst you’ve been here?

Have you got any \/white ones?

Did you see the beautiful \/sky last night?

The commonness of such fall-rises on YNQs in SSB is discussed in my English After RP. But it’s not a new phenomenon: over twenty years ago, American intonation expert Bob Ladd wrote:

in polite yes-no questions… it is quite common in RP but not in any North American variety to use… a high level prenuclear stretch and a falling-rising nucleus (Intonational Phonology, 1st edition, 1996, p. 122)

However, you may be unaware of this pattern if you’ve learned about intonation from British RP-based textbooks, which describe the intonation of now old-fashioned RP. The main pattern for polite YNQs in old RP was a high level prenuclear stretch followed by a nuclear low rise. This was called the ‘Low Bounce’ by O’Connor & Arnold in their classic Intonation of Colloquial English (2nd edition, 1973). Here it is, in examples from the accompanying cassette tape. (I’m old enough to have been taught by the authors; if I’m not mistaken, the first speaker is ‘Doc’ O’Connor and the second is Gordon Arnold.)

|Did you see O/thello on television last night?

Have you |thought any more about /getting a set?

Your reaction to those clips may depend on whether you’re native or not. Non-natives may recognize the patterns as simply the way they were taught to speak English. Native Brits, on the other hand, may be laughing at how old-fashioned (and posh) they sound – the kind of speech that natives now find hilarious in old films like Brief Encounter:

|Have you any with /nuts in it?

|Are you going to the pictures this after/noon?

This is by far the most common way of asking yes-no questions; it should be regarded as the normal way, with the speaker displaying genuine interest in obtaining the information requested. Any other tone group should be used only in the special circumstances outlined in the appropriate place in this chapter.

The fall-rise, which today is vastly more common than the RP Low Bounce, was considered by O’Connor & Arnold to be a rare pattern. They claimed it was only for YNQs which expressed surprise, especially echo questions, where ‘the effect… is of astonishment, as if the speaker can hardly believe his ears’ (p. 71). One of their examples:

The old-fashioned O’Connor & Arnold account of YNQs in RP was essentially repeated as recently as 2006 in John Wells’s English Intonation (Cambridge University Press). ‘The default tone for a yes-no question is a rise. We call it the yes-no rise’ (p. 45). The book’s audio clips are mostly examples of O’Connor & Arnold’s Low Bounce, occasionally sounding like clips from Brief Encounter:

Neither the mid fall-rise nor the rise-fall-rise is used with questions… The high fall-rise… adds animation or intensity and has the effect of making the question more specific. It can suggest astonishment, ‘as if the speaker can hardly believe his ears’ (p. 221)

This RP account is obviously quite inappropriate for contemporary ‘mainstream’ speech. None of the twenty assorted Brits illustrated above are using the fall-rise to express that they can hardly believe their ears. Nor is Meghan. They’re just being neutrally polite, interested, engaged. Clearly, a major change has taken place in standard British intonation; indeed, it took place long enough ago for Bob Ladd to describe it as an established characteristic of RP in the 1990s!

The full contemporary pattern, with high level pitch before the fall-rise, is not even described by O’Connor & Arnold, or by Wells’s English Intonation. (They associate the fall-rise with prenuclear falling pitch, which is still true in statements.) John Wells knew of the full pattern’s existence, but he didn’t consider it RP and therefore excluded it from the old-school RP that described in English Intonation. He mentions it as a ‘Near-RP’ form in his 1982 Accents of English (p. 373):

This suggests how the change took place. I think the ‘Near-RP’ fall-rise has  probably been in use for a long time, right across Southern Britain, by a wide range of speakers. Here it is from a Cockney cab driver and from Yorkshireman Lord Adebowale:

Have you got a \/nickname?

Is this the \/only pilot?

I think that as upper class speech became increasingly stigmatized in recent decades, and a wider range of speakers became respectable (see English After RP and blog posts of mine like this one and this one), the widely used fall-rise established itself as a YNQ standard – imitated today, quite appropriately, by Meghan. And the old RP-ish Low Bounce became a restricted option.

The Low Bounce is certainly not dead. But it’s harder to find in clips, and is quite often used for a particular effect. Let’s end with a few modern recordings that make use of the old Low Bounce.

|Did you see that /blighter, who |went /out just now?

This speaker is not asking anyone a real question, but rather is reading from a collection of stories by P. G. Wodehouse and C. H. Bovill, published in 1914. The word blighter, meaning ‘annoying fellow’, is described by Cambridge as ‘UK old-fashioned’ – and the reader has chosen the old-fashioned Low Bounce intonation to match.

|Did you see the UEFA /final?

This is a video from BBC Learning English. Again, the speaker is not asking anyone a real question but is reading, this time a textbook-style question (0:47). Although the video is trying to be up-to-date, the speaker here is talking like an old textbook. I think he’d be extremely unlikely to use this Low Bounce intonation if he were actually conversing with another native.

In another English-teaching video, this teacher actually makes a point of contrasting stilted ‘textbook’ speech and real speech (2:08):

The intonation that he uses to illustrate the artificial, stilted way of speaking is, surprise surprise, the Low Bounce.

[When this teacher goes on to say the question more naturally, he uses a falling intonation (as he does when he asks ‘Do we say it like this?’ in the clip above). The fall is at least as common as the fall-rise on YNQs. In fact, the fall and the fall-rise can be hard to tell apart; the little rise at the end of the latter can be very little indeed. As I say in English After RP (p. 106), ‘the contemporary Fall-Rise nuclear tone is often not fully realized… In natural running speech it can sometimes be tricky to distinguish it from the High Fall.’ I hope to exemplify this with audio clips (as well as the high rise, also used by Brits on YNQs) in another post.]