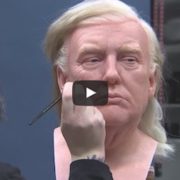 Madame Tussauds in London has managed to finish its wax figure of Donald Trump in time for his inauguration as 45th President of the United States.

With the exception of yogurt, the only common words containing unstressed -gur- are figure and inauguration, along with words related to them like figurative, configuration, inaugural and inaugurated.

Many English speakers, myself included, pronounce gur differently in the two groups of words. In inauguration and related words, we put a /j/ sound (the first sound in yes and use) after the /g/. But in figure and related words there’s no /j/. So we get e.g. inau/gj/uration but confi/g/uration. And figure rhymes with bigger.

This is the pattern shown in most British English dictionaries. But it isn’t true of all English speakers. A lot of Americans (but not all) are more consistent, using /gj/ in figure as well as inauguration:

(Furthermore, some speakers who rhyme figure with bigger nonetheless use /gj/ in related forms like confi/gj/uration. And some Brits don’t use the /j/ in inau/g/uration.)

Trump will be the first President to have already been modelled by Tussauds – a relatively slimline version made in 1997. The new Donald is a much bigger figure.