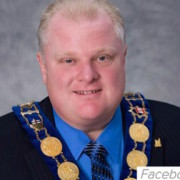 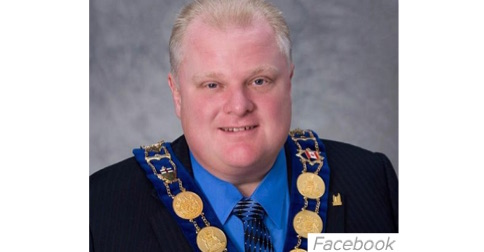 Mayors seem to have been much in the news this week, often under tragic circumstances. An Iraqi village mayor, Ahmed Shaker, was one of over 40 people killed in a suicide bombing after a football match near Iskandariya (Alexandria). Mayor Mayeur of Brussels has been speaking out since the bombings there that claimed over 30 lives. And troubled Toronto mayor Rob Ford (pictured) succumbed to a rare liposarcoma diagnosed in 2014.

All my life I’ve pronounced mayor exactly like mare (‘female horse’), with a single long vowel, mɛː. This is probably the most common pronunciation from British TV news people. Here it is from the long-time presenter of BBC TV’s Newsnight, Jeremy Paxman:

if he becomes mayor

This pronunciation can be heard in the audio clips of various dictionaries:

But another pronunciation is increasingly heard. This one has two syllables, mɛ́jə, rhyming with player and Leia:

…the Brussels mayor
Rob Ford, controversial mayor of Toronto
…including the local mayor
mayor Nir Barkat
that’s how he got to be mayor

The 2-syllable pronunciation is especially common with younger speakers, but is not restricted to them. Mayor Nir Barkat there is said by Stephen Sackur, a major figure in BBC news, who is 52. I suspect it’s arisen partly due to the spelling (compare mayonnaise, which begins mɛ́jə), and partly due to the ever-present influence of American English, which usually pronounces mayor with 2 syllables. But it’s unacknowledged as a British pronunciation in the online dictionaries I’ve consulted, and even in the variant-rich LPD.

To redress the imbalance, and because I suspect that the 2-syllable pronunciation will steadily displace mɛː, I’ve opted for the former as the recommended pronunciation in CUBE. Nonetheless, mɛː is still heard from some younger folks, as in BBC Radio 1ʼs Mayor of Where? – /hɪ(ː) kʌ́mz ðə mɛ́ː bət ðə mɛ́ː(r)əv wɛ́ː/:

Increasingly old-fashioned today is a pronunciation with a ‘centring diphthong’, eə or ɛə. Here is an example from a 1932 Pathé newsreel:

In my experience, non-natives who have learned the old transcriptions /eə/ and /eɪə/ (for ɛː words and ɛjə words respectively) are likely to pronounce them very similarly, so that payer pɛ́jə and pair pɛː risk being confused. The following might be either word:

It is in fact from prepare, said by Polish-born language teacher Michel Thomas. This kind of foreign-sounding pronunciation is actively encouraged by the transcription /eə/.