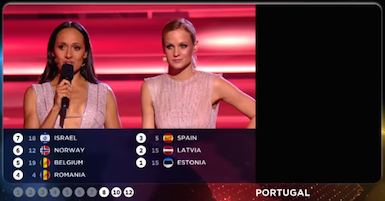 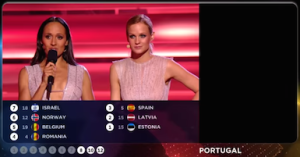 The voting stage of the Eurovision Song Contest 2015 provided several of those wonderful moments when TV contact with one of the countries is lost and its announcer disappears from the screen. When Portugal went black, one of the show’s Austrian hosts said, ‘Where are you?’:

The speaker, Alice Tumler, has a basically Southern-British type of accent; according to her Wikipedia page, she studied for some time in London. But her pronunciation in that clip isn’t what you’d hear from native Southern Brits. Ms Tumler glides directly from where to are without pronouncing a linking r.

Words like where used to be pronounced in England and Wales with a final r which was lost around the end of the 18th century (the r survives in Scotland, Ireland and North America). But the r typically re-appears when a vowel follows in the next word. And to be fair, Ms Tumler occasionally did use a linking r during the show, for example in ‘there‿it is’:

Note that the effect of linking r is to prevent vowels from coming into contact. Languages often try to prevent vowels from touching, and Southern British English is particularly allergic to this. Keeping vowels apart makes speech clearer. When I misunderstand non-native speech, it’s often because the speaker has allowed two vowels to blur into one another. Here’s Ms Tumler again:

In that clip she’s saying ‘when their names were announced’, blurring were into announced without a linking r to keep the vowels apart.

Wherever I teach around the world, I ask people to look at dictionary entries like the following for the word far, and to tell me the meaning of the superscript or bracketed ‘r’ in the UK/British transcriptions:

The most common answers that I get are: 1. pronounce the r in American English (which isn’t really an answer); 2. the r is simply optional – speakers can either choose to pronounce it or not; 3. the r should be pronounced ‘slightly’. No. The right answer is that it indicates linking r, which is pronounced, as I said above, when a vowel follows in the next word.

There’s a lot more on linking r in my long blog post here. A related phenomenon is ‘hard (or glottal) attack’, which I touched on in the blog post here.