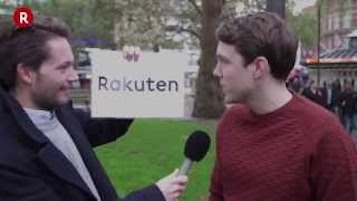 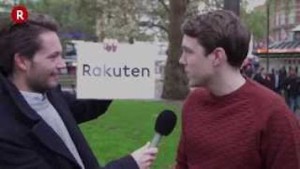 A Japanese client recently asked me how to pronounce Rakuten in English. This was an excellent question, because it’s always sensible to pronounce names with the sounds of the language you’re speaking. (I discuss this in more detail in Chapter Five of my mini-ebook SMART Speech.)

But I didn’t know the answer. Rakuten isn’t a very common or familiar word in the UK. I’d seen it written, but never heard it pronounced; in fact I hadn’t even realized it was Japanese. But it was important for me to find an appropriate English pronunciation, not only for my client but also for the CUBE dictionary. (We try to keep CUBE updated with new words and names, and via the CUBE website you can request new items to be added.)

Rakuten is Japan’s largest e-commerce company, and one of the world’s largest. (In revenue and number of employees, it’s very roughly one-tenth the size of Amazon.) Although word Rakuten in Japanese means ‘optimism’, the company is realistic about their lack of familiarity in the UK. They’ve even made a light-hearted video called ‘What is Rakuten?’ in which an interviewer asks members of the London public what the word might mean. None of those interviewed knows the name.

The video allows us to hear various British people saying the name. They mainly stress it on the middle vowel, rə-KU-tən, so that it rhymes with gluten, Newton and Luton. Here’s the interviewer:

This, I think, is how most English speakers would read the written word. In fact, gluten is the only common word of English whose spelling ends -uten.

This is very different from the original Japanese pronunciation, where the -u- is weakened between k and t, becoming ‘devoiced’ and almost inaudible. Also, this word lacks a Japanese ‘pitch accent’, which means that the final vowel has the highest pitch and sounds the most prominent to speakers of languages like English. Here it is on Google Translate:

Towards the end of the Rakuten video, the interviewer aims at a pronunciation more like this, with a heavy stress on the end, but it seems to be an effort. To get a natural pronunciation closer to the Japanese one, I think most English speakers would have to see a written form like Rack Ten or Lack Ten.

Native English speakers who work for Rakuten seem to pick up an ‘official’ company pronunciation with stress on the first vowel, RA-kə-tən. This can be heard in several YouTube videos. But members of the public seem more inclined towards rə-KU-tən, which the spelling encourages. This is shown nicely by another video, of a promotional event held by Rakuten in Manchester. Although the Rakuten employee who offers prizes says ‘a RA-kə-tən Superbag’:

the member of the public who wins one says ‘Nice one, rə-KU-tən’:

So I’ve opted for rəkʉ́wtən as the phonetic transcription in the CUBE dictionary. I think the Rakuten company will have to spend a lot of money on TV advertizing in the UK if they want to teach the British public to say RA-kə-tən.

By the way, Rakuten seem resigned to a pronunciation with stressed -u- in German-speaking countries. German has more words than English ending in written -uten, eg Guten Tag ‘good day, hello’, and these are pronounced –U-tn. This Austrian TV ad even uses the rhyming slogan Rakuten, die Guten: