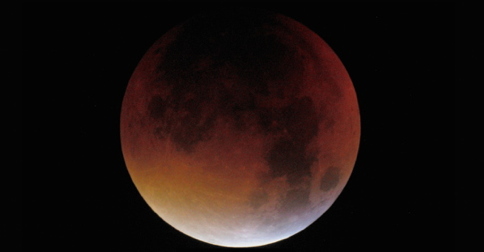 Last night we had the coincidence of a supermoon and a total lunar eclipse. A supermoon is a full moon when the moon is at its closest to the earth, and a lunar eclipse is the moon’s passing through the earth’s shadow. The last time this happened was 1982.

Back in 1982 there were still quite a few people who gave super the pronunciation /ˈsjuːpə/, as if it were s-you-per:

I fairly often find myself teaching non-natives who pronounce it this way, and who are shocked to be told it’s no longer a common pronunciation. Such speakers may be quite young, but had old-fashioned teaching. Nowadays the typical standard pronunciation has no /j/ and begins like soup:

This goes beyond the word super. In fact, teachers of English pronunciation today can reasonably give their students a nice general rule: English words never begin with /sj/. This goes for supervise, supermarket, sue, suit, suitable, suicide, superb, superfluous, superior, supreme, Susan, and so on.

Note.– super in isolation and in compounds is increasingly ˈsuːpə.

I wonder how many users of /ˈsju:pə/ will be around when the next supermoon-eclipse occurs, in 2033?