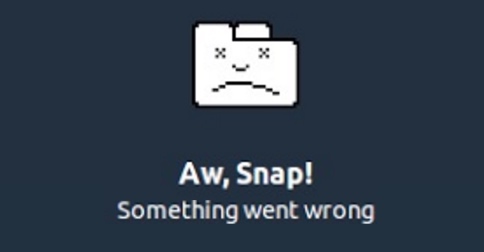 If you’re a user of Google’s Chrome web browser, you may have encountered a message beginning Aw, Snap! Something went wrong… when the browser is unable to display a page.

This took me by surprise when I first saw it. It’s not a use of snap! that’s found here in Britain, and I have no memory of it from my years living in America. Brits use this exclamation to register that the speaker and hearer have something in common, eg Snap, that’s the same phone as I’ve got or Snap, that’s exactly what happened to me.

This British use comes from a simple card game Snap, which most Brits learn as children. Players in turn reveal their cards and, when two successive cards have the same face value (eg two sixes), the first player who shouts Snap! wins all the revealed cards. The game is explained in more detail in this video (phonetics fans will notice that its presenter has labial r, TH-fronting and L-vocalization):

By contrast, the American use of the word, often preceded by aw or oh, is basically a euphemism (an inoffensive alternative) which replaces expletives like damn and sh*t. It’s typically a reaction when something bad happens. Here are some Americans using it:

and one speaker expanding it to snappadiddly:

As far as I can establish, this use seems to have originated in African American English and to have become mainstream relatively recently. I think it’ll have to be used more widely than in Google Chrome before Brits adopt it.