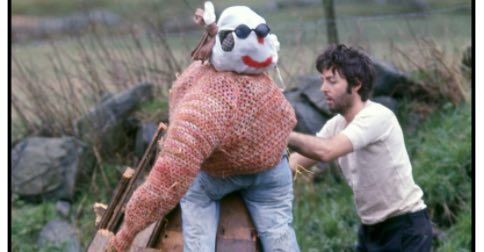 Sir Paul McCartney surprised his fans this week, mainly by suggesting that stage fright almost made him leave the Beatles, and then by tweeting an old photo to celebrate Britain’s Bonfire Night on November 5th.

The title Sir – which shows that he’s been knighted by the Queen – is often mispronounced by non-natives. Here is a non-native saying Professor Sir Paul Collier:

There the word Sir is pronounced strongly. In England, on the other hand, Sir is just a weak syllable sə attached to the given name. Some native examples:

(In the last example, Sir has no distinct vowel, giving Srisaac Newton.)

Here are all the instances of Sir in those clips:

This means that Sir sounds like the weak first syllable of surprise:

to my surprise
it should come as no surprise
they simply caught us by surprise
well, surprise, surprise
to amaze and surprise

And here are the first syllables of surprise in those clips:

Sir can be pronounced strongly, when used as a term of address rather than as a title. In England it then has the long vowel əː (often written ɜː). Native examples:

yes, sir
brilliant idea, sir
please, sir, can I have some more?
d’you know how to drive a tank, sir?
you, sir, are a pimp

And here are all the instances of strong sir in those clips:

Of course, if there’s a special reason to emphasize the title Sir, it may be pronounced strongly: