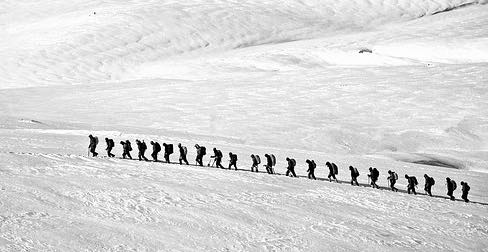 The conjunction and is often pronounced weakly as /ən/, with the colourless vowel schwa, and without its final /d/. This form is usual when and conjoins two words of the same type, even in careful speech styles like lecturing and newsreading. Here are War and Peace, Romeo and Juliet, Pride and Prejudice, Sense and Sensibility, all with and pronounced as /ən/ or /n/:

The preposition on, on the other hand, generally does not weaken, but rather keeps its full vowel. The quality of the vowel depends on the speaker’s accent; the British pronunciation is usually transcribed /ɒn/. The strength of on keeps it distinct from weak and.

A good way to illustrate this distinction is with native speaker recordings of the common phrase on and on, /ɒn ən ɒn/:

The word and may be pronounced strongly for emphasis. In this documentary narration, the speaker emphasizes the duration of an earthquake by saying the quake goes on… /and/ on… /and/ on:

By contrast, here are speakers saying life and, from the phrase life and death: