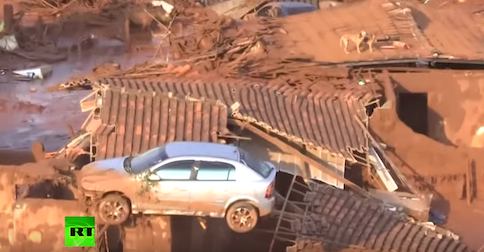 This month the words iron and environment have been tragically juxtaposed by the collapse of a dam at an iron ore mine in Brazil. The deluge of toxic mud flooded the Doce River, killing at least a dozen people, destroying a village and contaminating the water supply to 200 towns, and has now travelled the 500 km to the Atlantic. It’s said to be Brazil’s greatest environmental disaster.

Environment is generally pronounced as the spelling suggests, bearing in mind that the i is pronounced like the personal pronoun I, as in lion and diamond. The r is definitely pronounced:

As transcribed in the Merriam-Webster Learners Dictionary: /ɪnˈvaɪrənmənt/

The word iron is more unusual, with a more complicated pronunciation history. At some point, I guess before the mid eighteenth century, the o weakened or was lost, giving the kind of pronunciation suggested by the spelling of the Scottish soft drink Irn Bru.

A weak ə was inserted before the r, giving ˈajərn or ˈaiərn. In America, ər fused into an r-coloured vowel: as transcribed by the Merriam Webster Learners Dictionary, /ˈajɚn/:

Around the late eighteenth century, speakers in England stopped pronouncing r except before a vowel. This meant that ˈajərn became ˈajən, which is the contemporary BrE pronunciation:

Many dictionaries write this with ɪ instead of j, /ˈaɪən/.