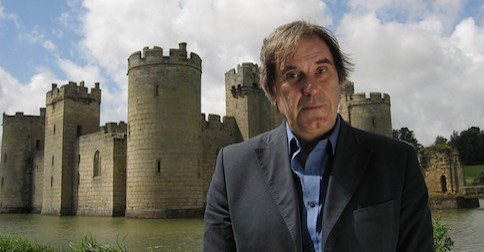 Everyone seems to be talking about the TV series Game of Thrones. I haven’t seen any of it, and don’t feel much inclined to, after all the spoilers I’ve been exposed to in social media and overheard train conversations. I did however watch two marvellous series about this country’s real-life game of thrones, Prof. Robert Bartlett’s The Normans and The Plantagenets.

An interesting feature of Prof. Bartlett’s speech is that he pronounces past participles like grown, known, shown as two syllables: /ˈgrəwən, ˈnəwən, ˈʃəwən/. This brings such words (back) into line with -en participles like broken, stolen, chosen. (Compare Middle English knowen, Old English cnāwen.)

So pairs like throne and thrown, identical for most of us, are differentiated: respectively, /θrəwn/ and /ˈθrəwən/. Here is Prof. Bartlett saying She’s shown kneeling:

And known as ‘misericords’:

He’s not unique. Just this week, the success of Wales in another historic game of conquest, Euro 2016, was celebrated by BBC Sports Editor Dan Roan with the words the togetherness this remarkable team has shown:

in which shown is pronounced as a rhyme with his surname: /ˈʃəwən/ and /ˈrəwən/.

I emailed Prof. Bartlett at the University of St. Andrews to ask about this feature, and he replied (with permission to quote):

I don’t think my pronunciation of “known” can be regional since my brother mocks it and we are both from South London.
Perhaps it is an unknown known.

Dan Roan, meanwhile, is from Northampton in the East Midlands.

I’m only aware of one accent in which this feature has been much discussed, namely that of New Zealand. Here’s New Zealand film director Sir Peter Jackson (Lord of the Rings, The Hobbit) saying the unknown thing with /ʌnˈnəwən/:

Perhaps, instead of telling me about Game of Thrones, somebody could enlighten me about the distribution of /ˈθrəwən/s.