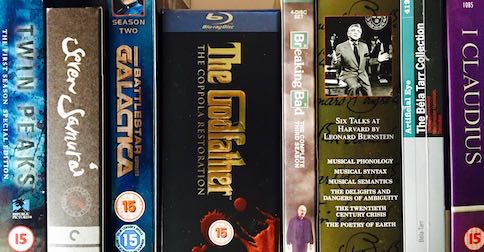 English has a verb to box, meaning ‘to put in a box’. A set of things which has been put in a box is therefore a boxed set.

Obviously sets of things have been put in boxes for a long time, but the concept has grown in recent decades, with the boxing of paperbacks, records, audiocassettes, videotapes, CDs, DVDs and Blu-ray Discs, and has been boosted further by the rise of the multi-season TV saga. Now such sets can be accessed in e-formats with no physical box at all.

The phrase boxed set, if carefully pronounced, contains a tricky consonant sequence: bo/ksts/et. Fortunately, English allows the omission of /t/ (and /d/) under certain circumstances. One of these circumstances is when one word ends /st/ and the next starts in a consonant. This gives us the perfectly standard option in spoken English of firs’ class, firs’ pas’ the post, las’ word, jus’ kidding, etc etc. (A frozen historical example is Chris’mas.)

It also gives us box’ set. This in turn can be interpreted as a compound noun – the noun box compounded with the noun set – rather than the noun set modified by the participle boxed. The British, in fact, have taken to writing the term as a compound, box set, something which Americans seem to have resisted.

This Google Ngram of occurrences in books suggests that the British developed a mania for boxed sets in the 1970s, with the Americans starting to catch up a few years later. British enthusiasm fell somewhat, to American levels, and then in the 1990s the Brits experienced a new craze for the compound box set, apparently unshared in the US:

Accordingly, the American site Amazon.com has a category Boxed Sets, while Britain’s Amazon.co.uk has Box Sets:

The only /t/ in those recordings is from the last of the Britons.