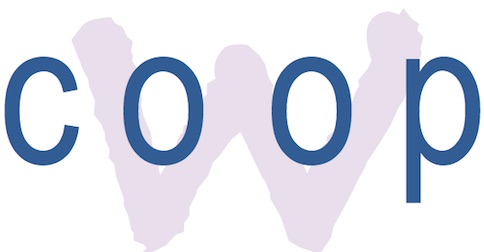 In native pronunciation, coop- is two syllables, and the transition between them is a w type sound. We could write this in various ways depending on the accent: kəwɔp, kowɑp, etc. Dictionaries don’t generally write the w, but I think it would probably help the non-native speaker if they did. Here are native cooperate, cooperative and cooperation, each word followed by its beginning:

Non-natives typically pronounce coop- as it’s written, with a single o quality and no w. Unfortunately, this is likely to sound like corp- as pronounced in England and Wales. As a result, non-native cooperation can sound rather like native corporation:

how much cooperation helps (non-native)
adviser to a corporation (native)

And non-native cooperate can sound rather like native corporate:

To highlight the difference, here is Russell Brand using both corporate and cooperate, followed by corp- and coop- (slightly slowed down):

An unrelated one-syllable word coop, rhyming with scoop, loop and troop, refers to an enclosure in which chickens or other poultry are kept.