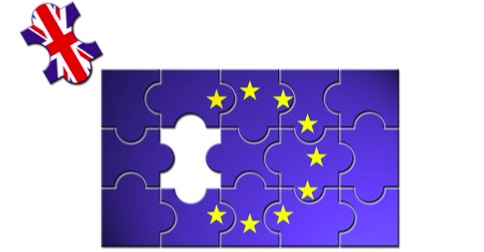 There can’t be many words which have gone from non-existence to omnipresence as quickly as Brexit.

but many Americans pronounce it /gz/:

This difference reflects the two pronunciations of the word exit (both noun and verb) which predominate on either side of the Atlantic. We can see the difference in a preference poll which John Wells took some years back for his Longman Pronunciation Dictionary:

It’s my impression that the UK-US divergence has if anything become more marked. Certainly we can find American dictionaries which prioritize /gz/, eg Merriam-Webster:

and British dictionaries which list only /ks/, eg Macmillan:

Here anyway are some Brits with /ks/:

and some Americans with /gz/:

The /ks/ pronunciation is consistent with a generalization in English regarding ex- and stress: if the e is more strongly stressed than the following vowel we get /ks/, if the reverse we get /gz/. Common examples of /ks/ after stress are:

And examples of /gz/ before stress are:

(The /gz/ pronunciations can survive even when a more strongly stressed suffix is added, eg e/gz/ist-éntial.)

So pronouncing éxit and Bréxit with /gz/ goes against the stress generalization. Perhaps it’s an American declaration of independence.

Other exceptions to the stress generalization are those words written with exc. These are pronounced with /ks/ regardless of stress, eg éxcellent, excéption.