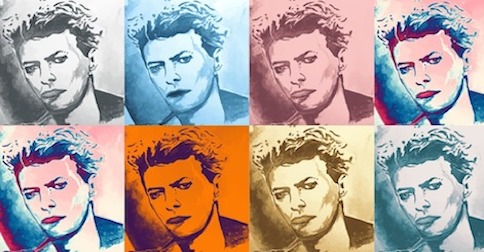 The death of David Bowie has highlighted more than ever the range of his achievements and the variety of his styles and personas. This included his performing accents, which varied from his native London (eg I’m a/the laughing gnome and you can’t catch me):

to the American-based pop-rock accent which I discussed in my article ‘Two Directions’ (eg but I can’t trace time):

Bowie’s variability even extends to the pronunciation of his name. (His adopted name, that is; Jones was his real name.) For most of my life I, like many people, pronounced the ow of Bowie with the MOUTH vowel, as in now, how and wow:

It was only relatively recently that I checked and found that the ‘right’ pronunciation has the GOAT vowel, as in low, know and show:

The BBC’s Pronunciation Unit marked Bowie’s 60th birthday in 2007 with a short piece which tells us:

Although his name is often pronounced as BOW-ee (-ow as in now) the pronunciation that he uses and we recommend is BOH-ee (-oh as in no).

There’s also at least one YouTube montage of clips in which Bowie is heard saying his name with GOAT vowel:

Despite this, the Daily Telegraph claimed this week that Bowie himself wasn’t sure how to pronounce the name. The evidence is an interview in 2000 with the BBC’s Jeremy Paxman in which Bowie says ‘I don’t even know how to pronounce it any more.’

Among the many pub discussions prompted by David Bowie’s death on Monday (what was his best song? What was his best persona?) one conundrum was being discussed up and down the land: what exactly is the correct pronunciation of his surname? Does the “ow” in Bowie rhyme with cow, or is it bow like no?

But I think Bowie says this as a tactful way to avoid accepting the interviewer’s pronunciation, which has the MOUTH vowel. Had Paxman used the GOAT vowel, I doubt that the star would have referred to it at all.

BOW-ee and BOH-ee are examples of the BBC’s re-spelling system. This is used because the BBC’s staff, like most people, are generally unfamiliar with special phonetic symbols. Note that the quote from the Pronunciation Unit gives example words as well, which are needed especially because the re-spelling of the MOUTH vowel as OW is ambiguous until explained. You can compare BBC-type re-spellings with phonetic symbols in the CUBE dictionary which I co-edit.)

Bowie claims in the Paxman interview that the Scots say the name not with GOAT but with GOOSE, ie as a rhyme with Louie, Hughie and Chewie. This pronunciation does exist, and not just in Scotland, eg as one pronunciation of bowie knife:

But I wonder if David Bowie in fact heard Scottish speakers saying his name with their GOAT vowel, and mistakenly interpreted this as GOOSE. Scottish MOUTH and GOAT

can sound rather like Southern England’s GOAT and GOOSE respectively: