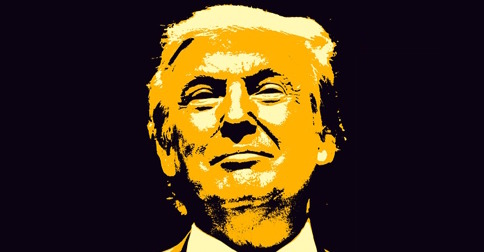 We can learn an important fact about English pronunciation from the controversy over whether US Presidential candidate Donald Trump has invented a new adverb, bigly. Britain’s Daily Telegraph thought this was the case:

Actually it’s hard to hear the end of Trump’s sentence there because of the applause. Here’s a clearer utterance which has been declared online to be bigly:

I myself thought for a while that Trump was ending many of his sentences with bigly, until I realised that it was more likely to be the phrase big league, with a final /g/. Wiktionary lists big league not only as a noun (referring to a major league, typically in sport) but also as an adjective (e.g. He made a real big league play) and as an adverb meaning ‘to a significant degree’. It’s as an adverb that Trump uses it.

With big league in mind, it’s easier to hear a final /g/ in many of Trump’s utterances. Here’s a sentence from his first debate with Hillary Clinton, then the two instances of big league slightly slowed down:

So how does the controversy arise in the first place? One factor is phonetic. The sound /g/ is a ‘stop’, which means the breath from the lungs is completely stopped; in /g/, the back of the tongue is raised up against the rear palate to stop the air. When /g/ is followed by a vowel, the stopped air bursts out as the closure is released. But if there isn’t a following vowel, American speakers frequently suppress or weaken the release burst; and without their release burst, stop sounds are harder to hear. Listen again to the first audio clip above and hear how there’s no audible /t/-burst at the end of either that or out. British and other accents can do this sort of thing, but it’s more general in AmE.

Another factor is that it’s relatively uncommon to hear big league as a sentence-final adverb; big time is a more common equivalent. On the other hand Trump does tend to talk in simple, large-scale terms (great, huge, etc.), and an adverbial form of the basic word big fits in with that.

If Trump is occasionally saying bigly, which I doubt, he is in fact resurrecting a Middle English word, as in

Dictionaries often write league and -ly with different vowels, /iː/ in league and /i/ in -ly. The fact that people on both sides of the Atlantic have heard league as -ly tends to support the view that they’re really just the same vowel.