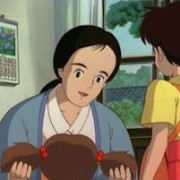 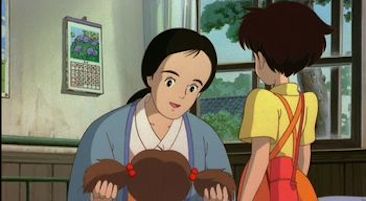 A Japanese colleague has asked me to clarify the meaning of a short phrase of (American) English. It comes from Disney’s English-language soundtrack to Hayao Miyazaki’s animated masterpiece Tonari no Totoro となりのトトロ ‘My Neighbor Totoro’.

The context is this. Two sisters visit their mother in hospital. Finding that the older sister has been cutting the hair of the younger sister Mei, the mother says to Mei, ‘What a lucky girl you are.’ My colleague thought that young Mei’s reply sounded like ‘Yeah…she yells at me a lot.’

If Mei’s reply were ‘Yeah…she yells at me a lot’, it would be strange, or unusually ironic for a small child. ‘Yeah’ expresses agreement that she’s a lucky girl; by contrast, ‘she yells at me a lot’ is inconsistent with being lucky. To yell at someone carries an implication of anger, especially in American English. (British English tends to favour shout at in the same kind of context.)

So what’s going on?

Native English speakers with reasonably good loudspeakers and ears may well have worked out the solution: between ‘Yeah’ and ‘she yells at me a lot’ is the word but. This can be made more apparent by acoustically ‘compressing’ the recording, which makes the quiet parts closer in amplitude to the louder parts, and by time-stretching it. Here is Yeah but she, first in the original, then compressed, then compressed and stretched:

There we can perceive more clearly the pop as the speaker’s lips separate for the b of but. There’s no following vowel to speak of, but then the speaker’s tongue forms the t which is released directly into the sh of she, creating something more like b’che (in phonetic transcription, btʃi or ptʃi).

Non-native readers shouldn’t conclude that this is a mispronunciation, or an oddity of child speech (actor Elle Fanning was about seven at the time of the recording), or an obscure dialect feature. But is one of a number of super-frequent little words which often appear in very weak forms – in fact, ‘weak forms’ is what they’re generally called. These weak forms – and, as, at, but, from, of, was, etc – may have the short, colourless vowel schwa, ə, or, as in this example, no vowel at all.

Weak forms are typically ‘proclitic’, which means they lean for support onto the following word. They help to give English its weak-strong ‘iambic’ rhythm. A consequence is that English phrases very often have weak beginnings, eg ‘but she yells at me a lot’. Non-natives, on the other hand, tend not to use weak forms so much when they speak English, and not to hear them when they listen to English. This is particularly my experience with Japanese students and clients. As we see in this example, however, they can be quite important for meaning.

For simplicity I omitted above to say that my Japanese colleague actually perceived the past tense form yelled in the clip. I’m pretty sure that it’s the habitual present tense yells, although its final consonant is weak and not very sibilant. I’d attribute this to the speaker’s young age. Sibilant sounds have complex articulations and often take quite a long time to be fine-tuned in children’s speech. Elle Fanning has clear, standard sibilants today.

Lastly, the word lot in the clip provides an excellent example of a final stop consonant ‘without audible release’. This means that the final t is formed but not then exploded. Such unreleased final stops are absolutely routine in American English, and British actors need to copy them if they want to do American accents.

Where are you?
Scroll to top