The Handbook of the International Phonetic Association defines SSB as follows:

Standard Southern British (where ‘Standard’ should not be taken as implying a value judgment of ‘correctness’) is the modern equivalent of what has been called ‘Received Pronunciation’ (‘RP’). It is an accent of the south east of England which operates as a prestige norm there and (to varying degrees) in other parts of the British Isles and beyond. (p. 4)

The main differences between classic mid-twentieth-century RP and contemporary SSB are in the vowels. In terms of the phonemic inventory, SSB totally lacks the old FORCE diphthong /ɔə/, which still appeared in RP materials as recently as the 1977 English Pronouncing Dictionary, 14th edition, but which has been fully merged with the THOUGHT monophthong /oː/. The old CURE diphthong /ʊə/ is also now mostly merged into THOUGHT /oː/.

In terms of distribution, old RP allowed the short lax vowels /ɪ/ and /ʊ/ in word-final position, but in contemporary SSB schwa /ə/ is the only short lax vowel allowed finally.

The remaining differences are in phonetic realisation, but these differences are extensive. The most familiar symbols for British English were chosen by A. C. Gimson 60 years ago to describe the upper-class speech of that time in a way that he described as “explicit on the phonetic level”. Sociophonetic change since then has been so drastic that to pronounce Gimson’s symbols with their true IPA values now sounds so old-fashioned to native speakers as to be comical.

The Gimsonian symbols are also phonologically misleading, suggesting an odd subgrouping of the long vowels and diphthongs, as I discuss at some length in this video.

In the following chart from my English After RP, I use IPA symbols to represent contemporary vowels in way that attempts to be phonetically and phonologically more realistic. Also shown, in faint grey, are the more traditional Gimsonian symbols where these differ. 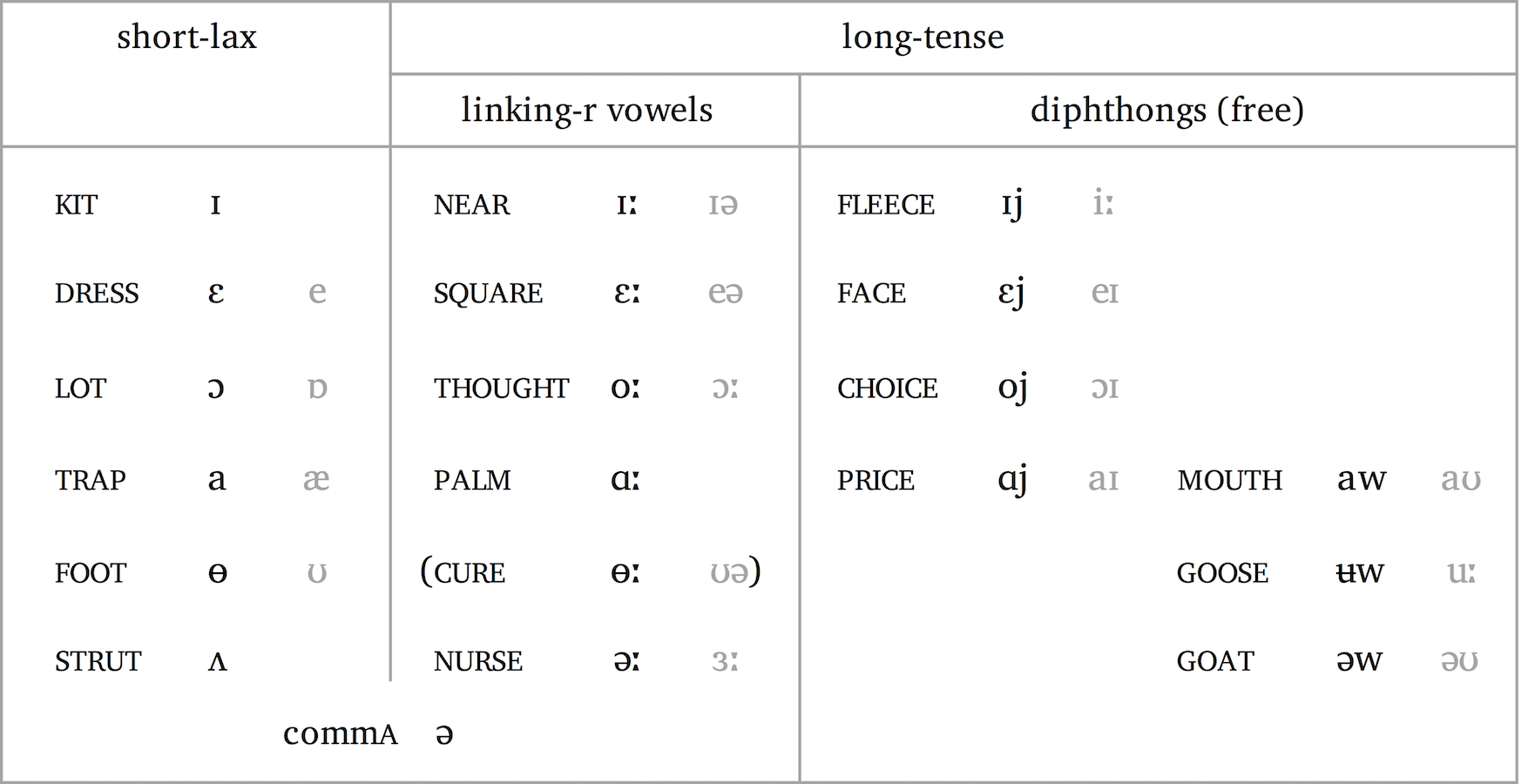 The vowels fall into these groups, according to their phonetic nature and phonological behaviour:

The NEAR vowel is highly variable and, as mentioned above, the CURE vowel is increasingly replaced with the THOUGHT vowel.

I discuss the whole SSB vowel system at length, with audio illustrations, in this article. I’ve also written the following individual blog posts on the vowels of commA and STRUT, LOT and NORTH, FOOT, FLEECE, NEAR, SQUARE and PURE. And all the SSB vowels and vowel categories are covered in English After RP.

The following chart by Péter Szigetvári compares the symbols I’ve chosen (described as “Lindsey”) with several earlier systems. (Colours represent the first system in which a symbol was used.) 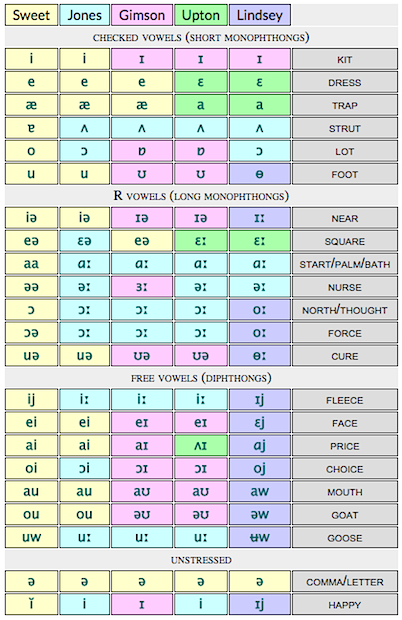