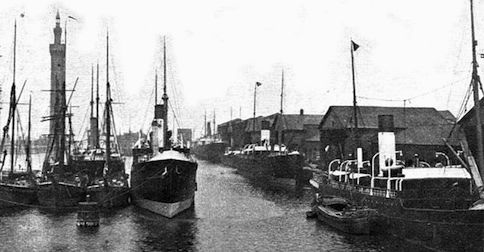 The actor Sacha Baron Cohen is famous for creating and playing a series of outrageous comic characters, each with a distinctive voice. He first came to fame as Ali G, who alerted a wide audience to the dialect that would come to be known as Multicultural London English. His latest creation is Nobby Butcher, from the English port of Grimsby, the working-class antihero of the film Grimsby, US title The Brothers Grimsby.

The film’s reception has been mixed, and Baron Cohen has received particular criticism for his accent.

Grimsby residents have blasted the accent of Sacha Baron Cohen’s character in his latest controversial film set in the town. Cohen plays Nobby in Grimsby, which debuted in cinemas across the UK today, and the film has received generally positive reviews so far.

According to Grimsby Telegraph reporter Mark Page, ‘None of the accents in the film are Grimbarian [from Grimsby], more just generically northern.’

I haven’t seen the film, but I did hear some of Baron Cohen’s words at the London premiere, where he appeared, in his underpants, as Nobby. Here he is saying there’s no chance… we have cast two black actors:

And, from the film’s promotional material, the reason I get up in the afternoon:

That’s a northern England accent, except that the words chance, cast and afternoon have the long vowel of PALM, as they do in British dictionaries. This is not a general British pronunciation: it’s characteristic of southern England (and of the SSB found in dictionaries). It arose in the eighteenth century, when some words with the TRAP vowel were ‘broadened’ before voiceless fricatives (eg bath, flask) or before a nasal plus a further consonant (eg trance, sample).

This diagram shows, roughly, the boundary (or ‘isogloss’) between the traditional pronunciation of the north and the messy broadening of the south: 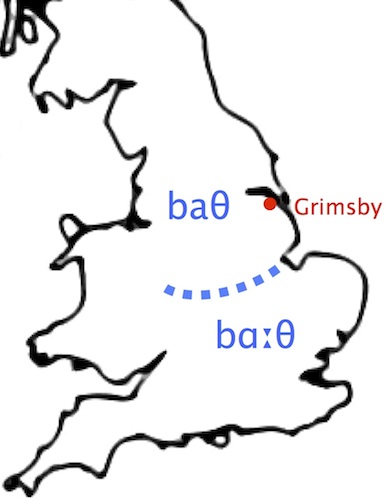 As you see, Grimsby is in the north. We can hear its accent in the BBC Voices resource on the British Library website:

The British Library Board acknowledges the intellectual property rights of those named as contributors to this recording and the rights of those not identified. Legal and ethical usage ” 2004-11-17 BBC Voices Recordings Grimsby, Lincolnshire Blythe, Marian, 1954 Aug. 04- (speaker, female, nurse and lecturer), Maurier, Jenny, 1947 Sept.

The Grimsby accent isn’t ‘generically northern’. One of its more distinctive features is a front NURSE vowel rather like that of Merseyside, eg the firm I worked for:

The real Grimsby accent does share a range of general northern features – including unbroadened BATH words. Here speakers from the Grimsby-Cleethorpes area exhibit a short TRAP vowel in I’ve got the chance and Tom was the last one:

Public-school-educated southerner Baron Cohen is phonetically very gifted. But, whether Nobby was intended to be echt-Grimbarian or generically northern, his broad chance, cast and afternoon are a bit grim.