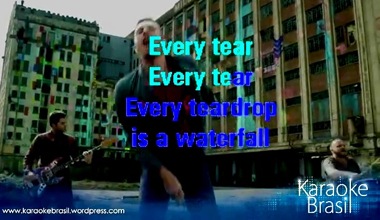 In the earlier standard/reference accent of British English, Received Pronunciation, words like NEAR contained a centring diphthong, ɪə. This was a vowel which glided from the lax quality ɪ to the quality ə within a single syllable. It can be heard in this clip from a 1930s Pathé documentary about beef and beer:

Such a vowel is heard relatively rarely today. Although British dictionaries still use “/ɪə/” in their transcriptions, a lax diphthong of this type is now rather old-fashioned.

In contemporary Standard Southern British (SSB), we hear tend to hear either
(1) a long pure vowel, the monophthong ɪː; or
(2) a form in which the tense FLEECE vowel is followed by schwa, which we could write as ɪjə or, with traditional symbols, as /iːə/; this form can plausibly be considered to comprise two syllables.
Many speakers use both forms. For such speakers, NEAR is what John Wells has termed varisyllabic, and the long monophthong in (1) can be thought of as derived from the disyllable in (2) by ‘smoothing’. I discuss smoothing rules in this post.

And here in a BBC documentary is UCL’s Professor Mark Miodownik saying here a carbon fibre composite is being made, with here pronounced as hɪjə:

Such varisyllabicity is also found in words of the WIRE, CURE and SOUR sets. Here, from the Cambridge and Oxford Advanced online dictionaries, are retire/retirement, secure/security, near/nearly. The ire, ur and ear portions sound disyllabic in the first word of each pair, monosyllabic in the second:

I said there that the relevant portions of those words sound disyllabic or monosyllabic. But it’s often unclear how many syllables there are in a given stretch of speech. One very useful kind of evidence is the way that native speakers fit words into the rhythmic patterns of verse and song. Verse forms often have a fixed number of syllables per line; and popular song, by default, sets one syllable to one note.

Let’s look at the varisyllabic treatment of WIRE in musical settings. Songwriter-performer Noel Coward, in his comic song Mad Dogs and Englishmen, set retire and perspire with -ire treated as a single syllable:

But other songwriters have broken –ire across two notes, with the schwa firmly belonging to the second. An example is the theme song to the James Bond film A View to a Kill (by John Barry and Duran Duran), where the line dance into the fire breaks fire across two notes — fi-re, as it would be written in a vocal score:

We can also find this kind of varisyllabicity within a single musical line. In his song Cat People (Putting Out Fire), David Bowie pronounces fire both as a single-note monosyllable and also as a disyllable broken across two notes, in the single line And I’ve been put-ting out the fire with ga-so-line, put-ting out fi-re:

The crucial point for this article is that NEAR words can exhibit exactly this kind of musical varisyllabicity that we’ve just seen in WIRE words, sometimes set to one note and sometimes set to two. (This never happens to the vowels traditionally written “/eə/” and “/ʊə/”.) Here is Paul McCartney singing the first line of his song Martha My Dear in a deliberate pastiche of old-fashioned RP, with dear pronounced dɪə and set to a single note:

But in Take That’s Holding Back the Tears, writer-performer Gary Barlow sings the word te-ars broken across two notes, with the schwa quality clearly belonging to the second:

(The final syllable of the line, -more, is sung as a cadential melisma, with its monophthong spread over three notes; Verdi often does a similar thing as an ornamentation.)

Gary Barlow is from the northwest of England, and speaks with a northern accent. Though his singing here isn’t northern-accented, his varisyllabic tears might be thought of as a regionalism. So let’s turn to the traditional territory of Received Pronunciation, and listen to some southerners educated at public schools (= exclusive private schools).

First, Thom Yorke of Radiohead, whose family moved settled in Oxfordshire when he was ten; he later attended the public school Abingdon. Yorke speaks with BATH-broadening, and has a somewhat conservative j in purs[j]uing. His song The Eraser repeatedly includes the phrase the more that I/you appear, and on every occasion he breaks -pe-ar across two notes, with the schwa quality clearly belonging to the second:

Coldplay’s Chris Martin (pictured above) attended the public school Sherborne. (He also has a First Class degree from UCL.) Last year’s Coldplay hit Every Teardop Is A Waterfall neatly demonstrates the varisyllabicity of NEAR within a single line, with the word tear occuring first as two syllables tɪjə and then as one tɪ(ː). The line is Ev’-ry te-ar, ev’-ry te-ar, ev’-ry tear-drop is a wa-ter-fall:

The evidence from speech and from word-setting in songs show us that NEAR words like tear and appear can show the same varisyllabicity as WIRE words like fire and retire. If NEAR is varisyllabic, it should be analyzed in the same way as WIRE. Just as WIRE can be analyzed as ɑjə (or, in conservative transcription, /aɪ.ə/), smoothable to ɑː, so NEAR should be analyzed as ɪjə (in conservative transcription, /iː.ə/), smoothable to ɪː.

The old-fashioned transcriptions in the major dictionaries, of course, don’t reflect this. They write a word like beer as “/bɪə/”. This transcription is phonetically more appropriate to the pronunciation we heard in the 1930s Pathé film than to contemporary speech. It also states unambiguously that a word like beer is a single syllable; this representation has no way of explaining the contemporary varisyllabicity.

The old-fashioned dictionary transcriptions misleadingly suggest that NEAR “/ɪə/” has the same structure as SQUARE “/eə/”. Allegedly they’re both centring diphthongs, starting with lax vowels and gliding towards schwa within the same syllable. This was true, of course, in old-fashioned RP. But if it were still true, then NEAR and SQUARE should pattern in a similar way. If, as we’ve seen, NEAR words can be broken across two musical notes, with ə assigned to the second, then the same should be true of SQUARE words. That is, analogous to Coldplay’s

we should expect to find the likes of

But such forms are totally non-existent.  SQUARE never exhibits varisyllabic behaviour. On the contrary, in contemporary SSB, SQUARE has simply transformed into a long monophthong, ɛː, so that it belongs to the same category as NURSE əː, START ɑː and NORTH oː.

Interestingly, there’s an increasing number of speakers who don’t have varisyllabic NEAR. For these speakers, NEAR has simply become a long monophthong ɪː, like SQUARE ɛː, NURSE əː, START ɑː and NORTH oː. These speakers never say nɪjə, bɪjə and hɪjə, but only the smooth forms nɪː, bɪː and hɪː.

So, in SSB today, we hear NEAR commonly as ɪjə and as ɪː. Some speakers use both; for them, NEAR may be considered varisyllabic, like WIRE and SOUR. Others seem to use only ɪː. Either way, the transcription of NEAR as a monosyllabic lax diphthong “/ɪə/” is now out of date.

When I first wrote this post in 2012, I underestimated the prevalence of younger speakers for whom NEAR is not really varisyllabic: in other words, who use ɪː a lot but ɪjə not so much. I implied that NEAR is simply varisyllabic in SSB. If this were true, then we could in fact dispense with a distinct NEAR phoneme: just as WIRE is composed of PRICE + schwa, we could say that NEAR is FLEECE + schwa, reducing our vowel inventory by one. In conservative transcription, we could replace all instances of /ɪə/ in dictionaries with /iːə/. This now seems untenable. For many younger speakers, it would be more accurate to replace all instances of /ɪə/ with /ɪː/ – so that the phoneme survives, but in monophthongal form, like modern SQUARE ɛː. This suggests that varisyllabic NEAR will disappear from songwriting as younger composers feel it to be purely monosyllabic.