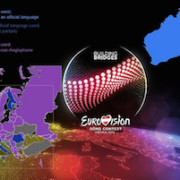 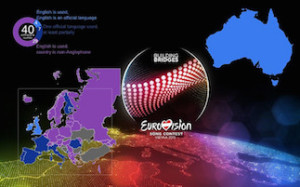 It’s been two years since I gallantly reported on the Eurovision Song Contest. I watched last night’s broadcast from Austria, ready for new developments. There was a hint in the air that radical changes had been ushered in with the 2014 victory of bearded drag queen Conchita Wurst (last night’s audience roared its approval when the opening film featured two men kissing). But phonetically it turned out to be business as usual, only moreso.

This meant that most of the songs were delivered in American English, often Southern flavoured; I’ve explained the reasons here and here. A few examples. From Austria, any time, any place, I’m yours:

From Sweden, sing it like a hummingbird, the greatest anthem ever heard:

From the UK, tantalize you with their lies:

And from Australia (yes, Australia), I don’t want tomorrow:

In spoken language, there was the same tendency as in 2013 for formal presenters to sound (Southern) British:

and for artists to sound American:

The number of non-English songs dwindled from eight out of 26 in 2013 to five out of 27 this year. These were the Romance Rump (France, Spain, Italy and Romania, the last of whom gave up and switched to English towards the end of their song) plus Montenegro, whose language Montenegrin is a variety of Serbo-Croat.

The three Austrian TV hosts scarcely deviated from English all night. So it was a nice surprise to hear one of the evening’s most multi-lingual contributions coming from London. Announcing the UK votes, Nigella Lawson managed to squeeze in German, Italian and French:

As in 2013, not all the English was as idiomatic as the examples above. Two years ago my ears heard the Tahomans singing your lav is pouring down on me; last night I heard Russia’s Polina Gagarina praying for piss:

Perhaps someone could refer her to my last post.

May the quiz be with you
Scroll to top