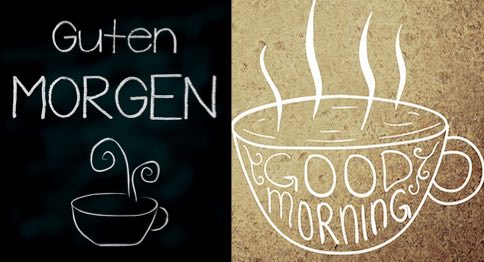 I once identified a speaker as German from the way he said good morning. The problem was that he mispronounced it as

whereas a native pronunciation would have been more like:

I constructed those two audio clips fairly crudely from words in the online German dictionary by Duden.  The first clip uses the initial syllables of Kutte kʊtə ‘monk’s habit’ and Morgen mɔʁgn ‘morning’; I’ve removed the aspiration from the former and the ʁ portion of the latter:

The German schwa of Gedicht makes a perfectly acceptable rendition of the vowel in weak English good, which can vary between the full FOOT vowel, ɵ, and schwa. (German schwa is often a little closer, fronter and even rounder than the English version, though not so much as French schwa.)

We can hear that the British English vowel of mor- (and of THOUGHT) is far closer to the oː of German Mond than to the ɔ of German Morgen. The following words could easily be BrE torn and dorm:

But in fact the clip is a German speaker saying Ton toːn and Dom doːm.

German ɔ does occur in BrE, but as the vowel of LOT. Just listen to the near-identity of German kommen and BrE common, German offen and BrE often:

And this perfectly acceptable pronunciation of often

begins with part of Daniel Jones’s own recording of primary cardinal 6, ɔ, crudely spliced onto -fən from the Oxford Advanced Learner’s dictionary.

Given that German and other languages contain appropriate vowels for BrE THOUGHT and LOT, oː and ɔ respectively, it’s a shame that BrE dictionaries and textbooks encourage learners to use inappropriate ones. The problem with the German-sounding good morning at the top of this post is precisely that it sounds like a dictionary transcription.

The orthodox transcriptions also tend to obscure similarities across accents of English. The following might be two stylistically different Southern BrE realizations of what:

But in fact they’re both by Scotsmen, First Minister Alex Salmond saying water and talk show host Craig Ferguson saying what about:

So the ɔ of these Scots’ LOT/THOUGHT is a better match for Southern LOT, as in what, than for Southern THOUGHT, as in wart. This is the reverse of what’s suggested by the orthodox transcriptions, namely that the two accents have different qualities in LOT but the same quality in THOUGHT.

In RP, the THOUGHT and LOT vowels were more open than they are in contemporary BrE; so was the main element of the CHOICE diphthong. Here is saw from the BBC’s Watch With Mother in 1957, followed by its first part, which sounds rather like the beginning of contemporary sock or sob:

Likewise the beginning of the Queen’s 1957 loyalty sounds like the start of contemporary lot:

According to the dictionaries, BrE LOT contains an exotic secondary vowel, the supposedly rounded-but-fully-open “ɒ”.  Its endless repetition in publications on BrE has given this vowel a familiarity out of all proportion to its scarcity in the world’s languages. Even in RP I doubt there was ever much reason to transcribe LOT with ɒ.  RP’s [ɔ̞] was adequately described with a short ɔ, the symbol which Daniel Jones himself used in broad transcription.

Also to be heard in recordings of classic RP is a version still more distinct from today’s LOT, namely ɑ, i.e. low, unrounded and short (ie differing from the PALM vowel only in length). Compare the stressed syllables of Margaret and tomorrow in this 1940 recording of the then Princess Elizabeth:

Today’s BrE certainly lacks ɒ, and neither the [ɔ̞] nor the [ɑ] realization of RP LOT required it. Frankly I suspect that ɒ is an entirely superfluous IPA symbol. Here are Jill House and John Wells demonstrating cardinals number 6, [ɔ], and 13, [ɒ]:

Is it likely that any language would make a contrast out of such barely audible differences? Do those represent two equally useful cardinal points in the vowel space? Surely not.

(The whole basis of the “secondary cardinal” vowels is shaky. The primary set, i e ɛ a ɑ ɔ o u, clearly maps out the periphery of any speaker’s auditory-acoustic vowel space, achieved in articulatory terms by complex adjustments of lip, jaw and tongue.  But it makes neither acoustic nor phonological sense to posit a secondary set by simply toggling the lip positions; the result is a rag-bag of common, not-so-common and non-existent entities, hardly any of which belong near the periphery of the vowel space. For more on this, see my more recent post on the vowel space.)

Lastly, it’s interesting to note that the Scottish o of GOAT usually has a closer quality than the oː of German Mond and Standard BrE THOUGHT, making it more like the THOUGHT of London-Estuary. This, for instance, might be London-Estuary pause:

But it’s from Scotsman Craig Ferguson again, saying you propose:

Scottish English, unlike German, lacks either ʊ or u, allowing its o to levitate north without loss of contrast. Many Scots have realizations of GOAT in ʊ/u territory, like this Scotsman’s o- in for over three:

Of course, Standard Southern BrE also lacks ʊ and u, despite what the dictionaries tell you. So the possibility exists that its THOUGHT vowel may continue to levitate, following London-Estuary and leaving German oː behind. RP’s pure close vowels, iː and uː, were just about its only feature that was more natural than contemporary BrE; perhaps BrE uː will one day be reinstated by the shape of THOUGHT to come.