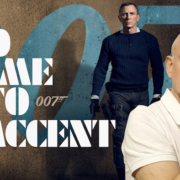 The release of the latest James Bond film No Time To Die has, like so many other things, been postponed. But we know from the trailer that it contains something very unusual – a phonetic joke.

As I discussed in my previous post, Bond always introduces himself in a particular way, in two phrases. The first is Bond, the second is James Bond. In the second phrase Bond, being a repetition, is deaccented. As each phrase has to have a main accent, it goes on James, and the result is like a compound:

That is, until now. The trailer for No Time To Die gives us a glimpse of 007 having to wait at counter while an official demands his name. And, for what must be the first time in nearly sixty years, the second Bond is not deaccented:

This little moment has been included in the trailer because it’s funny: it violates our phonetic expectations. Bond usually introduces himself in a confident, even arrogant way. But here it seems that 007 is being forced to go through security to get back into the secret service which he decided to leave at the end of the last film, Spectre (we’ll find out for sure when the film’s released). His surname alone isn’t enough for this official behind the counter. So, with what looks like seething indignation, Bond states his full name, as if he were starting over from scratch:

Admittedly, analysing a joke tends to ruin it. But many non-native users of English find deaccenting very tricky, and the example allows us to hear in detail what it sounds like. Remember that if you deaccent a final word, the main accent must go before it. In a compound like mailbox, for instance, where box is deaccented, mail gets the accent as if it were the end of the phrase.

And in all the other Bond movies, when Bond is deaccented, the preceding word James sounds as it would if it were the only word in the phrase. If you asked Bond to tell you just his first name, it would sound more or less like this:

In that clip I’ve simply cut out the following deaccented Bond – and James still sounds like a complete intonation pattern. But in the new film, where 007 doesn’t deaccent his repeated surname, James no longer gets the main accent and no longer sounds like the end of a phrase:

We only feel we’ve heard a full phrase when we get to Bond: