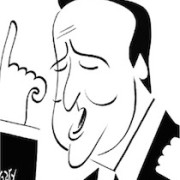 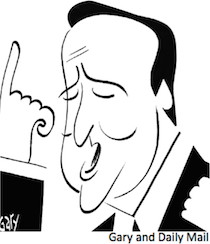 Prime Minister David Cameron has so far proved inimitable, despite having been in the public spotlight for years. This is odd: you have to go back half a century to short-term caretaker Alec Douglas-Home for a Prime Minister who lacked a well-known impersonation; and before him Macmillan, Churchill and Chamberlain are still occasionally mimicked.

The impressionsts Rory Bremner and Jon Culshaw have given us many great impersonations, but Cameron has defeated them both. Talking of Cameron among others, Bremner has said in interview, “People don’t really recognise their voices… there are fewer characters around… So there’s less to work with.”

This is an easy defence, and I don’t quite buy it. I think people can recognise David Cameron’s voice. Admittedly it’s not as out-of-the-ordinary as, say, that of the hyponasal/velarised Leader of the Opposition Ed Miliband. But I seem to remember John Major (PM 1990-97) being considered inimitably bland until someone hit on the brilliant idea of giving Kermit the Frog an Estuary accent, which did the trick. I suspect there’s a trick out there for Cameron.

Another wonderful impressionist, Alistair McGowan, is more candid, and more phonetic: “I’ve found him very difficult… I think because he has a very airy voice, I find it very, very hard. It’s quite high. I couldn’t get it as accurate as I want.”

Is there any advice to offer? McGowan may be onto something with “airy”, if he means a kind of “expanded cavity” voice. This is characteristic of the actors Sir Donald Sinden, Patrick Stewart and Morgan Freeman, though they all have low-pitched voices, while Cameron’s, as McGowan rightly points out, is relatively high. I do hear Cameron’s LOT vowel as very far back.

Some impersonations can work by visual impact alone: Iman Crosson gets applause at 0:18 of this video for just standing and blinking like President Obama:

Alistair McGowan talks interestingly about the physicality of impersonation in this interview, also making the point that it’s easier to mimic someone older than someone younger.  Both McGowan and Bremner are older than Cameron, who possibly requires a younger impressionist and/or one who naturally bears him a greater resemblance.

It seems to me that David Cameron’s most distinctive physical characteristics are his large forehead, which doesn’t have any phonetic relevance, and his lip-jaw position, which does. His upper lip is generally tight across his upper teeth, hiding them almost constantly. By contrast his chin is prominent and his lower lip is pushed out a lot of the time, though quite narrowly (his mouth isn’t wide). Cartoonists get this – for example Gary’s cartoon at the top of this post. Culshaw and Bremner, on the other hand, have used mouth shapes that Cameron never has: 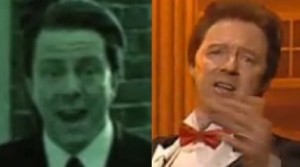 So I would suggest that wannabe PMs should practise speaking while maintaining (and indeed exaggerating) this setting of lip and jaw, and to adopt this frequent lip-sucking posture between phrases (which Bremner does use occasionally). As far as Cameron’s accent is concerned, I’d resist the temptation to overdo old-school RP, and I’d use a lodda t-voicing. At least some of the time, Cameron also seems to have apical (tongue-tip) [t] and [d]. An apical [t] combines with that far-back LOT vowel to give a pronunciation of toxic that strikes me as very Cameronian:

Accent of the Year / sibilants in MLE