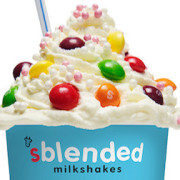 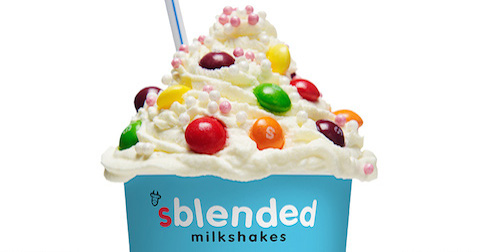 (A longer version of my Words of the Week post. The additional material starts here.)

The name of Sblended, a British chain of milkshake bars, is a very nice pun. On the one hand, it’s short for ‘it’s blended’. It’s can be shortened to ts or just s, as in the title of the famous Gershwin song ’S Wonderful (the song begins one minute into the clip).

On the other hand, the name sounds just like the adjective splendid. If you remove the s from a recording of the word splendid, the remainder sounds like blended – beginning with a b, and not with a p as in plenty. Here are recordings of blended and splendid, some of which have been made by removing s from splendid or by adding s to blended:

This is not just a fact about the words blended and splendid. It applies to all syllables which begin with s followed by a ‘plosive’ consonant, ie one written with p, t, or k/c.

Words like peach, tuck and cot begin with aspirated consonants. (I explain aspiration here.) Many non-native speakers of English correctly use aspirated consonants in such words, but unfortunately use the same aspirated p, t, k in s-words like speech, stuck, Scott (and splendid). This is wrong. Here I am saying Scott correctly, then repeated with a gap after the s to show that the remainder sounds like got:

And here I am saying Scott incorrectly, with aspirated k as in cot:

Some may be wondering, since ’s blended sounds like splendid, whether they should be transcribed similarly. My view is that the most insightful phonemic transcription of both would be /sblɛndɪd/. However, in the CUBE online dictionary which I co-edit, we ultimately decided to show /splɛndɪd/ by default, with /sblɛndɪd/ only as an option. Here I’ll dis/g/uss some pros and cons.

English has six contrasting plosives which fall into two sets, most widely symbolized as /p t k/ and /b d g/. When they precede the vowel of their syllable, /p t k/ exhibit aspiration, or appreciable ‘Voice Onset Time’ – a delay between the plosive release and the start of vocal cord vibration. /b d g/, on the other hand, have a VOT close to zero.

The plosives in /s/-clusters have a VOT close to zero; in phonemic analysis, therefore, the criterion of phonetic similarity should assign them to the /b d g/ phonemes rather than /p t k/ phonemes. And, from a practical point of view, non-native users of transcriptions should be guided to pronounce plosives in /s/-clusters like /b d g/, and not with the long VOT of /p t k/.

It’s often said that plosives are aspirated in the onset of stressed syllables. I say this myself in my video on aspiration. Indeed, aspiration tends to be longer and more noticeable in stressed syllables. But the VOT difference between /p t k/ and /b d g/ is also found in unstressed syllables, eg police and balloon. And again, the first plosive of spaghetti patterns with the /b/ of balloon rather than the /p/ of police:

Similarly, the ending of rusty is interchangeable with that of Rushdie:

It’s not only /s/, but fricatives in general, which restrict a following plosive to the /b d g/ kind (unless a major boundary intervenes). So the endings of larder and laughter are also interchangeable:

In other words, the most phonetically and phonologically insightful phonemicizations of these words are /rʌsdiː/ and /rʌʃdiː/, /lɑːdə/ and /lɑːfdə/. The same thing can be found in final position: the final plosives of words like pleased and least are typically interchangeable:

Admittedly, those final plosives are both voiceless and /t/-like. But when followed by vowels they will have the short VOT of /b d g/. That is, pleased‿about it and least‿of all may both contain the /də/ of domestic. And so it would make sense to transcribe both pleased and least as ending in /d/. As John Wells conceded in an excellent blog post, “If someone wants to transcribe English this way, I find it difficult to argue forcefully against the idea.”

The relevant question, it seems to me, is why a phonetician or phonologist would not transcribe English this way, when the reasons to do so are strong. Well, there are two reasons why we decided against this kind of transcription as the default in the CUBE dictionary. One reason is fairly good, the other is frankly not so good, but important.

The goodish reason, as I see it, is that a fair number of transcription users have mother tongues with voicing assimilation. These include Russian and Dutch. Such speakers, if presented with /sb sd sg/, will tend to pronounce them [zb zd zg], assimilating the voicing of /s/ to the following plosive. This is why such speakers will often pronounce Facebook as Phasebook, or textbook as tegzbook.

The weaker-but-important reason is tradition. Both lay people and academics have been conditioned by spelling and by traditional transcription to think in terms of ‘sp st sk’. CUBE allows the user to search not only by spelling but also by sounds. If users wish to search for /s/-clusters, it would be unreasonable (we decided) to demand that they search for /sb sd sg/ rather than the traditional /sp st sk/. This is why CUBE will, by default, show splendid as /splɛndɪd/.

However, we retain the more insightful /sb sd sg/ as an optional alternative, eg /sblɛndɪd/. This option may be selected under ANALYSES.