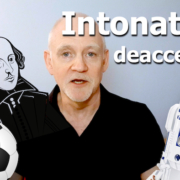 Today I’ll look at an important feature of English intonation that many non-natives find really difficult. This is deaccenting: saying a word, especially at the end of a phrase, without any accentuation.

We can see deaccenting at work in ‘compound stress’, where the second of two words loses its accent:

The difficult thing for most non-natives is not where you put the accent, it’s saying the final word without an accent.

A very important function of English deaccenting is to indicate given information (also called old information). Given information means an idea that’s already in the mind, such as a word that’s just been said.

Consider the way James Bond introduces himself. He always uses two phrases. The first is just the word Bond, and the second phrase is James Bond. The repetition of Bond is given information, and it’s deaccented: it loses the accent it had in the first phrase. Now there has to be a main accent in every phrase, so in the second phrase it has to go on James, the new information in that phrase. It becomes like a compound: airport, press conference, James Bond.

Most other major languages don’t work like this, and many non-natives find that it doesn’t come at all naturally to deaccent given information. The artists who dub Bond into Spanish generally do quite a good job of mimicking the English intonation, but we can find examples of Bond, James Bond with an accent on the second Bond:

An even more famous dramatic line with this kind of repetition is Hamlet’s To be or not to be. It’s the most well-known line in English literature, and actors performing Hamlet often feel an obligation to say the line in a unexpected way. But when English speakers quote this line, we practically always deaccent the repeated to be, putting the main accent on the new word, not: to be or not to be. This normal pattern is the one used by the actor David Tennant:

In Italian, to be or not to be is essere o non essere, and examples on the internet typically show accentuation of the second essere:

There’s a widely-held belief that English accentuation is all about emphasizing “important” words. It isn’t. We don’t say press conference because press is more “important” than conference; it’s because it’s a compound. The reason we say Bond, James Bond is not that James is more “important” than Bond; and in to be or not to be, the relative “importance” of not and to be is the same whether Hamlet’s Danish, English, Italian or Japanese. English just happens to deaccent repeated items.

In my last post, I mentioned that expressions ending in numbers have the main accent on that number. Examples:

An exception to this is the little robot from Star Wars, R2-D2, who has the main accent not on the final number, but on the letter before it. The final 2, of course, is a repetition: it’s given information, and deaccented. There’s also a contrast, between the two letters. Contrasted items are often accented, and this gives us R2-D2 – so that neither instance of the repeated number is accented.

There’s something similar to this in the way football scores are read out. Normally there are main accents on the scores (the names of the teams often have accents too):

But there’s an exception to this when the score is a draw. If the score is repeated, it’s deaccented, and its main accent must go on the team:

Arsenal one – Liverpool one

Here’s a real example from the BBC:

Alternatively, the announcer could have highlighted the contrast between the two teams who have drawn, and deaccented both instances of the repeated number: Newcastle United nil – Fulham nil. This would be even closer to R2-D2.

To end, let me point out that the deaccenting of repeated numbers generally doesn’t apply within a single numerical expression like a phone number, date or price, where we adhere to the basic rule of putting the main stress on the final number. So £5.95 is five ninety-five, not five ninety-five. The current year is 2020 not 2020. But if we have repetition across two numerical expressions, deaccenting and contrastive stress typically come into play. For example, fourteen and eighteen have their main stress on -teen, but 1914-1918 is typically nineteen fourteen to nineteen eighteen, like RD-D2.

I’ve been asked about my pronunciation in the video of the verbs accent and deaccent with stress on ac, rather than on cent as traditional dictionaries suggest. My pronunciation is quite well established. (I once consulted the British tutors on the Summer Course in English Phonetics about the verb accent, and they agreed on initial stress.) This could be American influence: AmE prefers initial stress on the verb accent, like the verb research. My book English After RP has a chapter on the tendency for BrE to shift stress earlier like this.

stronger-accented parts of the UK

Her English was very heavily accented

accented notes in B

The home’s exterior is accented with arches…

I do recommend that people check YouGlish whenever possible. If speakers do one thing and dictionaries recommend something else, the dictionaries may well be out of touch.

No Time To Deaccent
Scroll to top