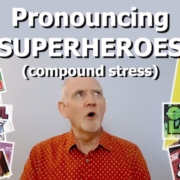 Why are superhero names pronounced the way they are? Some are stressed on the first part, like WONDER Woman, and some on the second part, like Invisible WOMAN. Why is it GHOST rider but silver SURFER? Why not ghost RIDER and SILVER surfer? And why do native speakers vary in how they stress some names like Iron Fist and Harley Quinn? Addressing these questions allows us to explore the tricky world of compound stress.

The classic superhero name is made up of two words. About 70% of IGN’s top 100 comic book heroes are the two-word type. To pronounce these with the correct stress, the basic question we have to ask is, what kind of word is the first word? Is it a noun (a ‘naming word’), or is it an adjective (a ‘describing word’)? If it’s a noun, the stress is on the first word:

If it’s an adjective, it’s stressed on the second word:

So it goes with superheroes. Examples of the noun type:

And the adjective type:

(Of course many English words function as more than one ‘part of speech’. Wonder is most often a verb, but in Wonder Woman it’s a noun, as in ‘woman of wonder’. Human can function as a noun, but it’s bascially an adjective, as in human being and human rights.)

Now, the first type are compound nouns, and the second type are noun phrases. A popular way of referring to their stress patterns is ‘single stress’ for the compounds, and ‘double stress’ for the phrases. This distinction is about intonation: in phrases like Invisible Woman and great food, we can put intonation accents on both words, but in compounds like Wonder Woman and dog food, we have to avoid putting intonation on the second word. It’s this ‘deaccenting’ of the second word in compounds that non-natives tend to find so hard, particularly when they’re written ‘open’, with a space between the two words. For deaccenting, check out my recent video post.

The difference between compounds and noun phrases isn’t just stress, it’s also in the meaning. Noun phrases are more literal, while compounds are more suggestive. An invisible woman is literally invisible, but Batman isn’t literally ‘bat’: his association with bats is more suggestive or evocative. Ghost Rider has ghostly associations, but as far I’m aware isn’t literally a ghost. Black Panther, on the other hand, is named after a panther that’s black.

Note that a compound noun can be put inside a noun phrase, like [small [bathroom]] or [nutty [geography professor]]. At least one superhero name is like this: [Martian [Manhunter]].

There are a lot more phrase-type superheroes with colours:

And of course there are a many more compounds:

In many superhero names, the first word is a noun of a special type, an honorific. That’s a formal title or job description. When we put an honorific before a personal name, it’s the name that’s accentuated. As I have a PhD, I can be formally called Doctor LINDSEY, and among superheroes and supervillains we have Doctor STRANGE, Doctor MANHATTAN, Doctor DOOM, Doctor OCTOPUS, Captain AMERICA, Captain MARVEL, Captain BRITAIN, Mister FANTASTIC, Professor X, Judge DREDD, and even Detective CHIMP.

Rocket Raccoon’s an interesting case. Rocket is a common noun, like spider or wonder. But other characters call him Rocket, so for him it’s a name, Rocket RACCOON, like Mickey MOUSE and Donald DUCK – and, for that matter, Heathrow AIRPORT, Hyde PARK and Yale UNIVERSITY. In fact he’s named after Rocky Raccoon, the hero of a Beatles song:

On the other hand, it’s entirely possible to use rocket as the first part of a normal compound, as in the Elton John song ROCKETman:

Harley Quinn is unusual name, because it’s a pun, a play on words. It deliberately resembles the single word harlequin, which is stressed at the beginning. And some people do stress this character’s name like that, HARLEY Quinn:

The British comic strip character Andy Capp works in exactly the same way. His name deliberately resembles the word handicap, stressed on the first syllable like harlequin. But as a full name it’s Andy CAPP, like Harley QUINN.

Probably the trickiest area in the discussion of compounds involves cases where the first word is a noun that acts more like an adjective, like spring BREAK, child PRODIGY, gold EARRINGS. The meaning in these cases is more literal than suggestive: the earrings are literally gold, the prodigy is a child, and the break is part of spring. And we have a few superheroes of this type: like spring BREAK, we have Winter SOLDIER, and like gold EARRINGS we have Silver SURFER. (The words gold and silver often refer to the colours of the two metals.)

It’s open to debate whether examples like these are true compounds. They can alternatively be seen as noun phrases in which the adjective slot is filled by nouns with certain types of meaning. These types of meaning include constituent materials (e.g. gold EARRINGS, concrete WALL, beef STEW), times (spring BREAK, morning RUN) and locations (town HALL, kitchen SINK). In many cases a noun seems to be used because English lacks an adjective with the relevant meaning, e.g. child PRODIGY and celebrity CHEF (the adjective childish has a specialized meaning and is typically used to describe adults).

Some examples are torn between treating the first word more like an adjective, or more like a typical noun. In fact English dialects can differ on this. In the UK, boy scout is treated like child PRODIGY: boy SCOUT. For Americans it’s just a regular compound, BOY scout, like BATman. In my youth we generally said ice CREAM like gold EARRINGS, but it’s gradually moved to the American compound form, ICE cream. And you can even find this variability in a single speaker. The superhero Iron Fist might be named after a fist that has the literal quality of iron, as Black Panther is named after a panther that’s black. If so, we get Iron FIST:

Alternatively, it might be taken less literally as a standard noun-noun compound, IRON Fist:

In some cases, the standard compound pronunciation wins out completely. This is true of most oils and juices, like SUNFLOWER oil and ORANGE juice. A literal man of iron would be an iron MAN, but for the superhero, like ORANGE juice, it’s IRON Man.

Adjectives, too, can find themselves in early/single-stressed compounds, where their meaning stops being literal. A green HOUSE is literally green, but the compound GREENhouse is only suggestive of greenery. The invisible WOMAN is really invisible, but Darkman isn’t just a dark MAN, and Deadpool not only isn’t a dead pool, he isn’t even named after a pool that’s literally dead. So they’re DARKman and DEADpool.

As we’ve seen so far, most two-word superheroes begin with either a noun or an adjective. There are only a few examples of other possibilities, like pronouns or verbs, and these go with the classic compounds: SHE-hulk, WATCHmen. Likewise DAREdevil and KICK-Ass, though those verb-noun compounds were around before they became superheroes.

There’s one hero I haven’t mentioned yet, and you may have being wondering why, as he’s pretty much the daddy of them all. Super can be used as a rather old-fashioned adjective, meaning ‘excellent’; but Superman isn’t just an excellent man, he’s above other men, faster than a speeding bullet, etc. Used like this, meaning ‘over and above’, super is a prefix. Its counterpart is sub, meaning ‘under’. And stress patterns with these prefixes turn out to be variable. We have SUPERvisor but superINTENDENT, SUBcontractor but subCONTINENT. There are even words that are pronounced both ways. Some say SUPERnova, some say superNOVA. And, yes, many say SUPERhero but many others say superHERO. Correspondingly, among superheroes we have on the one hand Sub-MARINER and, on the other, SUPERman.

Superman seems to have set the pattern for putting the stress on the first word when the second word is man. This seems a practically exceptionless rule, applying not only to Batman, Spider-Man, Iron Man and Darkman, but even to Elongated Man, who despite being literally elongated, seems nonetheless to be pronounced ELONGATED Man. But, in terms of his name’s makeup, Superman isn’t quite as typical as you might have thought.

What happens inside you when you speak: MRI
Scroll to top