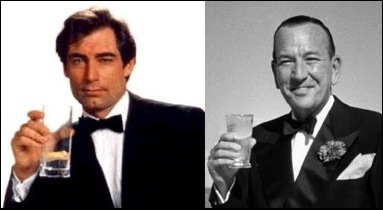 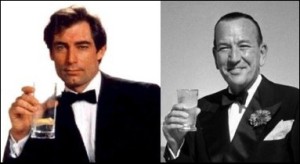 As I’m sure you all know, 2012 is a major jubilee year in Britain. Sixty years ago, Ian Fleming wrote the first James Bond novel, Casino Royale. Fifty years ago, the first 007 film, Dr No, was released. And twenty-five years ago, Timothy Dalton made his debut as Bond in The Living Daylights.

Dalton had a more serious acting background than the previous Bonds. Sean Connery had played Macbeth on Canadian TV, and Roger Moore had briefly attended the Royal Academy of Dramatic Art. But Dalton, in addition to training at RADA, had extensive theatre experience including the Royal Shakespeare Company; he’d made a prestigious film debut in the The Lion in Winter opposite Katharine Hepburn, Peter O’Toole and Anthony Hopkins; and his TV roles included literary heavyweights like Heathcliff and Mr. Rochester in Jane Eyre.

To me, the most distinctive phonetic characteristic of Dalton’s Bond was his frequent use of a tapped (also called flapped) r sound, [ɾ]:

Dalton does also use the approximant [ɹ], the standard r in England, America and elsewhere; and it seems to be his preferred realization after t and d:

And he’s quite capable of using both variants in the same sentence:

Dalton’s “intrusive” r tends to be the tap. Here he is saying raw opium, then Ursula Andress (from an interview), then (from a non-Bond film) my quota of subjects:

Twenty-five years ago it struck me as a bit odd that Bond should tap like this, though I don’t recall anyone else commenting on it. In Britain the tapped r is chiefly a regionalism. One of the regions where it’s used is Scotland, exemplified by Dalton’s greatest predecessor:

A tapped r is also quite common in Wales, so Dalton’s tap might conceivably be associated with his having been born in Colwyn Bay on the North Welsh coast. (Until Daniel Craig became Bond, a nice trivia question could be constructed on the different nationalities of all the Bonds: Connery Scots, Lazenby Australian, Moore English, Dalton Welsh, Brosnan Irish; New Zealander Sam Neill was almost cast, which would have added another.) However, according to Wikipedia, neither of Dalton’s parents was Welsh and before he was four the family moved to Belper, Derbyshire, where he grew up. So his real accent background is less Welsh than north/midlands of England, of which the tap is not so typical.

I think a more plausible explanation of Dalton’s tap is that classical theatrical background of his. We know from Daniel Jones’s Outline of English Phonetics (1918) that a tap was an intervocalic option in old upper class speech:

A variety of r known as “semi-rolled”, by which we mean rolled, but formed by one single tap of the tongue (narrow phonetic symbol [ɾ]) is used by many Southern English speakers between two vowels, as in arrive əˈraiv, period ˈpiəriəd, but this pronunciation is not essential; the use of [ɹ] is equally correct.

The stereotypical view of the British from abroad has tended to be based on the old upper class, and this gave rise to the American phrase veddy British, veddy being an American orthographic rendition of very with a tap.

The use of tapped r in the more prestigious forms of British English has declined almost to vanishing point over the past century, but it seems to have lasted longer on the stage. The tap may have been cultivated out of a belief that it “projects” better than an approximant, or even from the longstanding notion that Italian represents an ideal for vocal production. (Taps, and trills, still persist in the singing of English in classical music.) And from a sound-symbolic point of view, an abrupt strike of the tongue to the alveolar ridge is probably more dramatic than a smooth approximation with little or no contact.

Here, to illustrate the classical theatrical tradition of tapping, is Laurence Olivier in Shakespeare:

(As with Dalton, there seems to be a tendency to avoid the tap after t and d.)

When I was young, the tapped r was widely associated with one individual above all others: Noel Coward. Coward (pictured above, next to Dalton) is less of a household name now than he used to be. He was very roughly a Stephen Fry of his day, though even more accomplished: a multi-talented (and gay) writer-actor-wit whose image as a performer was a posh, old-fashioned stereotype of Englishness. His output included iconic dramas of English stoicism like the film Brief Encounter, musicals (he composed too) and comic songs like Mad Dogs and Englishmen.

Coward was also a close friend and neighbour in Jamaica of James Bond’s creator Ian Fleming. He was best man at Fleming’s wedding there 60 years ago, during the writing of Casino Royale. (Fleming, by the way, pronounced it Casino ˈɹɔɪəl, not ɹɔɪˈæl or ɹɔɪˈɑːl.)

In t[ɾ]opical climes the[ɾ]are certain times of day, when all the citizens [ɾ]etire to take their clothes off and perspire. It’s one of those [ɾ]ules that the g[ɾ]eatest fools obey…

(Coward there is using the tap in every prevocalic environment, even after t and z.)

Tapping isn’t the only feature of Dalton’s speech which seems rather “stagey”. He also has a marked habit of clearly releasing final plosives which in more natural speech would be “masked” by a following consonant. (Eg natives practically never explode the final consonants of lap and olympic in laptop or olympic games.) I’m a fan of Dalton’s, and his first Bond film The Living Daylights is one of the better ones, but for me he does mar the punchline of its pre-titles sequence by fussily articulating both t’s in make that two:

I sometime hyper-articulate like this when I’m teaching and/or talking to non-natives. Many actors, I believe, have been taught always to explode their endings; but there’s a fine line between clarity and artificiality. Here is the young Dalton in The Lion in Winter saying it comes and goes:

We can plausibly attribute those unmasked plosives on it and and to the character’s calculating manipulativeness. But with high-level non-natives who want to sound more native, that’s a kind of pronunciation I try to reduce.

What I find striking is that the tap and the non-masking don’t make Dalton sound either posh or old-fashioned. This, I think, is because they’re countered by other characteristics which are progressive and/or regional. As early as 1968, for example, we find Dalton using monophthongal SQUARE:

His STRUT varies between the ʌ type:

and something more like schwa (here both as Bond and in interviews):

Before writing this post, I’d also formed the vague impression that Dalton was not a BATH-broadener: that, like northerners and Americans, he retained the TRAP vowel in those words which southerners “broadened” to PALM in the 18th century, such as bath, laugh and answer. But he does seem to broaden BATH as Bond, at least in The Living Daylights (the key words are afternoon, chance and fast):

He also BATH-broadened in 1968 as King Philip of France:

It’s chiefly in later roles and interviews that I’ve found him not broadening. Here’s his Julius Caesar (which, unless digital tinkering is involved, also shows a remarkable descent in pitch since the 1960s):

Dalton has more than once portrayed Americans, tending to take a rather minimalist approach to the accent. Here he is as an “Irish American” responding to the demand “Tell me of your family”:

His unbroadened last week at the end is pretty much the only nod across the Atlantic in that clip. So it’s perhaps strange that he’s shown greater americanization on US talk shows, not only leaving BATH unbroadened but throwing in initial dark l and yod-dropping for good measure:

My guess is that Dalton’s “underlying” northern accent essentially lacks BATH-broadening, and that he’s adopted it for his work – perhaps decreasingly so as time goes by and the gravitational pull of old RP weakens.

A feature that’s a bit tricky to pigeon-hole is Dalton’s GOAT vowel, which can be somewhat monophthongal, beginning more back-rounded than schwa:

There are several conceivable sources for this. One might be Wales. Another might be the north of England. Yet another, perhaps, might be America. But I tend to favour the same explanation that I suggested for his tapped r and non-masking, namely stage traditions. Theatrical voice coaches commonly advocate relatively monophthongal, “italianate” vowels. Earlier this year in a post on Dialect Blog, Ben Trawick-Smith wondered about the scope of the “veddy British” tap, inevitably discussing Noel Coward, and continued:

This real life/stage life dichotomy is a problem that goes beyond one feature. For example, in older RP, the ‘o’ in ‘code’ is pronounced much as it is in General American English, with a fairly back-starting diphthong (transcribed as [oʊ]). You can hear this sound in this old recording of John Gielgud reciting a monologue from Othello. Yet in this interview from the 1960′s, it’s clear that in his personal speech, Gielgud used a central-starting ‘o’ sound

Like the tap, in other words, a back and/or rounded start of GOAT seems to have been preserved longer on the stage than off it. However I don’t think that this kind of GOAT vowel is as much a part of the old-fashioned English stereotype as tapped r. On the contrary, Americans making a stab at a traditional “British accent” will often begin GOAT with a markedly front, unrounded quality. Nor do I think that most Brits have the same “old, posh” intuitions about [oʊ] in GOAT that they have about, say, [æ ~ ɛ] in TRAP; although comedian-mimic Harry Enfield (whose TV show also gave us the Scousers heard above) was clearly thinking of it in his famous parodies of old RP:

Although the North American producers of the 007 films have always been careful to keep Bond British, they’ve also generally avoided the decidedly posh Englishness of Fleming’s hero in the books. I think it’s no accident that they’ve cast so many non-English actors – keeping him slightly international, and socially more vague than the old RP stereotype of a Noel Coward. Timothy Dalton’s particular mixture of theatrical features with less conservative ones makes him sound somehow classy but classless, and rather mysterious. I certainly think that his speech contributed to his status as the most Byronic of the Bonds.