You are here: Home1 / words

Warning: count(): Parameter must be an array or an object that implements Countable in /afs/intranet.ailesse.eu/service/www/com/englishspeechservices/www/web/wp-content/plugins/yop-poll/models/poll_model.php on line 1060 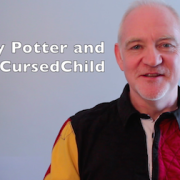 J. K. Rowling has announced an upcoming stage play Harry Potter and the Cursed Child. As I explain in the video, the word cursed can be pronounced as one or two syllables. The two-syllable version is rather old-fashioned and means either ‘bearing a curse’ or ‘deserving to be cursed, annoying’. On the other hand, the one-syllable form of cursed ends in a t sound which my be omitted when followed by a word like child, making cursed child sound like curse child. (Think of firs’ class and wors’ case scenario.)

More precisely, t and d may be dropped from the end of a word when the next word begins with a consonant and the t or d is preceded by a consonant with the same degree of voicing. The way to remember this is with the pair firs’ class, secon’ class. The t may be lost from first because both it and the preceding s are voiceless (or ‘fortis’). The d may be lost from second because both it and the preceding n are voiced (or ‘lenis’).

The stressed vowel of cursed is the NURSE vowel, a long schwa, which is also the English hesitation vowel.  The unstressed vowel may be either schwa or the KIT vowel ɪ.