Over the years I’ve occasionally been approached, say after giving a talk, by an American clutching a dictionary, who tells me they “just have one question”. It’s usually the same question: what is the difference between ʌ and ə?

There’s a lot of confusion about ʌ and ə in American English. It’s easy to find online, on Q&A sites and in YouTube videos by well-intentioned tutors. My own latest video begins with a compilation of clips in which various attempts are made to explain the ʌ/ə issue, in terms of length, pitch, loudness, laziness etc. The main points of agreement seem to be: 1. Americans must know and use both symbols, 2. schwa must never, ever, under any circumstances be stressed.

As I go on to explain in the video, I totally empathize with the confusion, because I went through it myself as an undergraduate student. Like most Americans, I myself have a native accent with one vowel phoneme that occurs in both syllables of words like above, Russia, luscious, fungus and double.

I’m from Merseyside, the Liverpool area. Although English northerners are famous for pronouncing STRUT words like run, cup, and love with the FOOT vowel, many other northerners pronounce such words with schwa, and that’s my native system. (My next video will look at the range accents that do the same thing.)

There’s no doubt about my only having one vowel here. When I was 13, I invented my own phonemic alphabet, without the help of any books, guided only by my intuitions. I definitely used the same symbol for the two vowels in double, and for the underlined vowels in Young Winston.

So a few years later when I arrived at University College London and encountered the phonemes of RP (Received Pronunciation), I was at first surprised and confused by a distinction between something written /ʌ/ and something written /ə/. To transcribe RP, I needed to work out when to use these two different symbols. And this is the position many confused Americans find themselves in.

But Americans aren’t transcribing RP! So why do they feel they need to write two phonemes, when their accent, like mine, has only one?

It’s because numerous influential resources transcribe AmE with exactly the same /ʌ/ and /ə/ symbols that are used for RP, or contemporary SSB. These resources include the two best known pronunciation dictionaries, the Longman Pronunciation Dictionary and the Cambridge English Pronouncing Dictionary. But neither of these explain why they show an ʌ-ə contrast for AmE. At least the Longman admits what it’s doing:

LPD distinguishes between the vowels ʌ and ə, although in American English they can generally be regarded as allophones of the same phoneme.

I’ll get to the possible reason for their decision in a moment. First I want to point out that there are many important resources which show the single American schwa phoneme for what it is, and completely do without /ʌ/. These include: 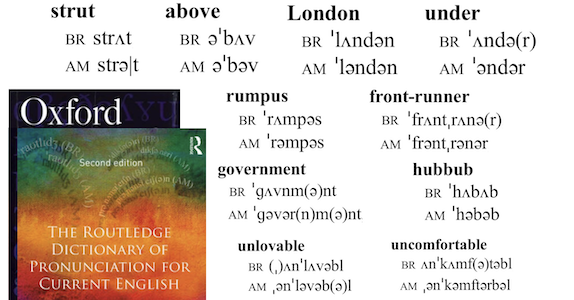 This isn’t some new thing, by the way. For example, the single /ə/ phoneme is used in 1957’s classic An Outline of English Structure by Trager and Smith.

(Even the dictionary I co edit, CUBE, though we’re not quite ready to release our American version, has an option to display just one phoneme rather than two.)

So back to the question, why is it that some resources feel a need to phonemically misrepresent General American? I think an important factor is a desire to maintain a dogma that “schwa is never stressed”… even though it widely is.

As I said before, I’ve been through all this myself, as a student. If you’re trying to transcribe RP and you have /ə/ but not /ʌ/, you have to remember the rule: write it with a schwa symbol when it’s unstressed, but write it /ʌ/ when it’s stressed. And this is the exquisite irony: it’s those of us who do stress schwa who cling most pathetically to the rule that it isn’t stressed, because it means you can transcribe RP without having to look every ə/ʌ word up in a dictionary.

But, sooner or later, this strategy is bound to go wrong. In the video, I show a clip of an American YouTuber insisting that the word undone is /əndʌn/. Of course it isn’t: for those with a STRUT-commA contrast, it’s /ʌndʌn/. The YouTuber is aware of the stress difference between the two syllables and has been led to believe that stress differences require him to write different symbols. So he makes this mistake precisely because he stresses schwa every day of his life! It’s the insistence by various resources on two symbols for American English that causes so much mystification.

Note by the way that when Americans show pronunciation by means of respelling, as they very often do, they feel no obligation to show a difference, using “uh” for both their stressed and their unstressed schwa. Here’s the old NBC handbook of pronunciation.

In re-spelling, it puts “uh” in stressed and unstressed syllables. It’s only in IPA that it has to pretend there’s two phonemes. Which suggests that, for many people, the unstressable-schwa dogma isn’t even about speech: it’s just a typographical commandment about where one can print a particular visual squiggle.

The dogma is astonishingly entrenched beyond specialist phonetics: 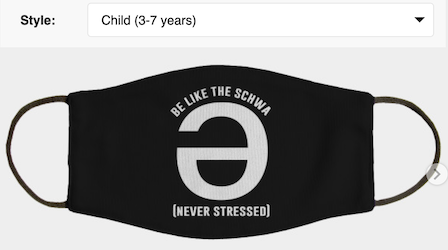 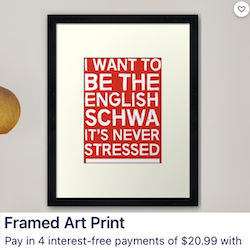 And academic linguists face the dilemma of how to deal with all the facts that contradict the dogma. The dilemma is articulated beautifully in English Accents & Dialects by Hughes, Trudgill and Watt. The authors describe a range of English accents which, like mine, have stressed schwa, and then wonder how they can reconcile the evidence with the dogma that’s available on T-shirts and tote bags:

This sounds to me rather like sleight of hand. To paraphrase…

given that one of the conventional defining properties of the Emperor is that he’s nude only in private,
it might be best to view the Emperor in public as wearing a suit of lovely clothes that is neutralised with respect to total nudity. 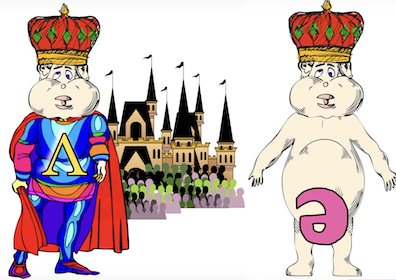 As the authors say, it might be best to do that… And then again it might not.

Of course there’s nothing on the IPA vowel chart that says any of the vowels are unstressable! Nor would it make any sense to have two sets of vowel symbols, one for stressed syllables and one for stressed syllables! And dictionaries don’t generally show allophones (variants) of a given phoneme: they use the same symbol for the two different /l/s in illegal, and the same symbol for three very different /t/s in treatment.

Now, across languages, we sometimes find phonological systems that have some kind of typically central vowel that’s the result of processes of reduction or epenthesis, or is in some way restricted to weak prosodic positions. We can find this kind of restricted vowel in French, German, and some accents of English, including SSB. I can understand that phonologists want a label for this phenomenon, but I don’t see how they can have exclusive rights to the name “schwa”, because all over the world that word is indelibly associated with the symbol /ə/. And that symbol means a mid central unrounded vowel that’s just as stressable as any other vowel (and which is stressed by a wider range of English speakers around the world than those who can’t stress it; more in my next video).

So, Americans: if you’re a dialect specialist for example, of course you’re going to want to learn a wide range of symbols and exactly what they all mean. But for most ordinary people, phonemes are more than enough. And most Americans, as far as I’m aware, have one STRUT/commA phoneme which, despite the dogma all over the merchandise, occurs in unstressed and stressed syllables.