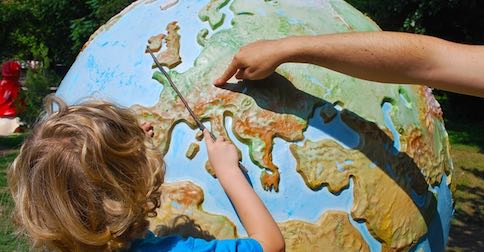 I’ve been lucky enough to teach across Europe, and one phrase which I hear a lot, sometimes to my confusion, is thee you:

At least, thee you is what it sounds like, or sometimes the you. The intended phrase, however, is not two syllables but three: the E.U.

What’s going on here is the blurring together of the two syllables the and E. Speakers from various language backgrounds often pronounce the as ði and E as i, so the phrase becomes ðiiju or just ðiju.

In native English, this kind of pronunciation is only possible in very rapid speech. In less rapid speech, the division between the and E can be heard either as a ‘glottal stop’ (a catch in the larynx, symbol ʔ) or as a j sound (like in the middle of beyond). Here are natives saying the E.U. with a glottal stop between the and E:

If a glottal separation isn’t used, the will generally be linked to a following vowel by a j sound. This j is not an addition, but part of the first vowel: ðɪj or ðij. The most common type of dictionary transcription doesn’t show the j, but it’s been noted at least since Henry Sweet’s Primer of Spoken English of 1890, which writes the vowel as ij. Here are natives saying the E.U. with the first two syllables connected, and separated, by j:

By contrast, here are some non-native ‘thee you’ pronunciations: 1. thee you is not interested in granting aid; 2. we are very close to thee you; 3. the third one is obviously thee you funds; 4. the former minister of thee you.

(Another issue is the English letter names. If these end in a vowel, it must be a long vowel, because English words never end in stressed short vowels. Very many non-natives pronounce E and U too short.)
You may be interested in these related articles in my Speech Talk blog:
It wasn’t acceptable in the 80s
Seeing the FLEECE diphthong