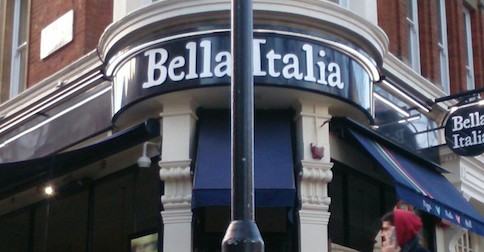 Dozens of police were called to London’s Leicester Square on Wednesday when a woman was taken hostage in a branch of the Bella Italia restaurant chain. The incident ended without violence, but not without letting us hear many journalists giving the restaurant its usual pronunciation in England, Bellaritalia. For example you can hear London Live’s correspondent saying it at 0:25 and 0:56:

For most speakers in England (and Wales, Australia and New Zealand), Bella is a perfect rhyme with words like cellar and dweller. Similarly, tuna is pronounced exactly like tuner, panda exactly like pander, rota like rotor, cheetah like cheater, schema like schemer, etc. These words all end in a colourless ‘schwa’ vowel, ə. Those written with final -r are far more common than those written with final -a, many of which are foreign words and names.

Native speakers of all languages are only taught to read and write after they’ve acquired the spoken language. Native speakers in England know how to pronounce words like rota and rotor – ie identically – but they may be unsure of the respective spellings. So it’s not hard to find mis-spellings, like this chapter which begins ‘The helicopter rota blades thrash the air…’

Now when one of these words is followed by a vowel, r may appear as a link to it, eg cellar‿insulation, dweller‿in the dark. The r is particularly likely to be used when the words are a common combination, like for‿example or better‿off. This linking r was long ago generalized from the more plentiful and frequent -r words to the -a words. Which is why we also often get BellarItalia. And PizzarExpress:

The unwritten linking r is used not only by voice artists and newsreaders but also by those who are too posh to read TV news. Here’s Prince Charles saying cheetahrand snow leopards:

So, if you really want to sound English, you should at least consider doing the same.

My long blog post on linking r is here.