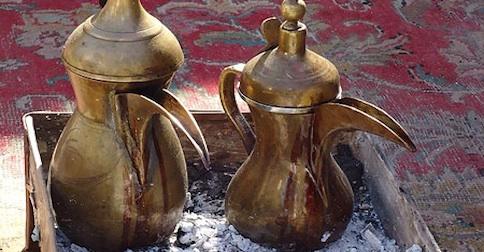 A word which even proficient non-natives often get wrong is Arabic. They’re tempted to stress it on the middle syllable, aRAbic:

whereas the correct native pronunciation is stressed on the first syllable, Arabic /ˈarəbɪk/:

Arabic is one of only a handful of exceptions with initial stress. The commoner ones are rhetoric, lunatic, politic, turmeric and heretic, plus a few names like Dominic and Ludovic. Note that these are mainly nouns, whereas in general -ic is an ending which creates adjectives: organ > organic, romance > romantic, history > historic, etc. Arabic is basically a noun referring to the language. The general adjective relating to Arabs is Arab, as in Arab world, Arab culture, etc.

The word arabica, on the other hand, is aRAbica /əˈrabɪkə/:

This is entirely consistent with the pattern that puts stress immediately before -ica. So we also get America, Antarctica, harmonica, Metallica, erotica, sciatica, basilica. Arabica is from coffea arabica, the Latin name of the Ethiopian coffee-producing plant.