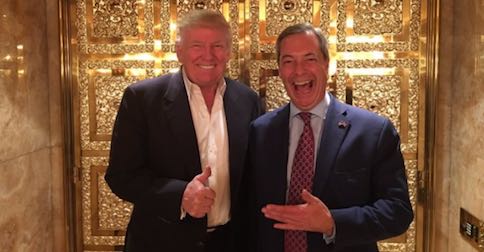 It was a great honour to spend time with @realDonaldTrump. He was relaxed and full of good ideas. I'm confident he will be a good President. pic.twitter.com/kx8cGRHYPQ

This weekend I misheard an American journalist on TV. She was commenting on the visit to American president-elect Donald Trump by Brexit champion Nigel Farage. I thought at first that she was saying It’s a convenient day for terrorism:

It didn’t take me long to see my mistake. She was responding to Mr Farage who, when asked about his arrival in the lobby of Trump Tower, replied We’re just tourists. Not believing him, she commented sarcastically, Huh – it’s a convenient day for tourism:

The reason for my mishearing was the quality of her vowel in tour-, which was evidently not one my ear normally expects there.

The British and American phonetic transcriptions in several well-known dictionaries imply that tour- should begin similarly in the two accents: the British pronunciation is typically given as /tʊə(r)/, the American as /tʊr/. But Mr Farage’s tourists and the journalist’s tourism begin quite differently:

Tour, tourist and tourism traditionally belong to a group of words including poor, moor, cure, secure, pure, during, Europe, contour which the classic British Received Pronunciation of the 20th century said with a ‘centring diphthong’ ʊə. It’s relatively rare to hear such a diphthong, gliding from ʊ to ə, nowadays. In England many of these words have switched to the vowel of thought and north, transcribed traditionally as /ɔː/. For many speakers this includes tourist. Here, with the /ɔː/-vowel, are tourist attraction(s), tourist guide, tourist sectors:

Nigel Farage doesn’t use this pronunciation; but it wouldn’t be accurate to describe his vowel in tourists as a centring diphthong either. His pronunciation conforms to a pattern described in the speech of British newsreaders by phonetician Bente Hannisdal:

In words like Europe, rural and tourist, where the /r/ is present, the vowel tends to be realised as a monophthong [a pure, unchanging vowel] by the speakers in the present study. This monophthong may be interpreted as a variant of /uː/…

So, using traditional dictionary symbols, we might transcribe Mr Farage’s tourists as /ˈtuːrɪsts/.

The American journalist’s tour- is different again. Its vowel quality is more open, less back and less rounded than a real ʊ or u (or o) – which is why I was able to hear terrorism. Central qualities are possible for some CURE words in America: as John Wells puts it in his Accents of English,

Another possibility is for CURE words to have the NURSE vowel; this seems particularly common with the words yours and sure, so that surely then becomes a homophone of Shirley /ˈʃɜrli/.

The Merriam-Webster Learner’s Dictionary transcribes this kind of pronunciation for cure and pure as /ˈkjɚ/ and /ˈpjɚ/. Listen to these American clips of cure that child and pure relativism:

I’m not sure if I’ve previously heard Americans using the NURSE pronunciation in tour, tourist or tourism, pronouncing tour- like the first syllable of turkey (and, for many speakers, tournament). I’d be interested to hear from American readers if that’s how they hear the journalist’s tourism above.